Taoiseach Leo Varadkar and British prime minister Boris Johnson have said they “can see a pathway to a possible deal” on Brexit following a meeting in England. Video: Reuters 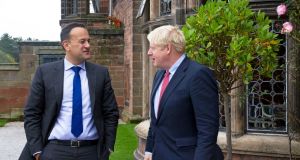 After three days of hostile briefings, mutual recriminations and predictions of doom, a three-hour meeting in a hotel outside Liverpool has transformed the mood around Brexit. Leo Varadkar gave little away about what was discussed in a brief exchange with Irish journalists, and Boris Johnson said nothing at all.

But one phrase in their joint statement stood out: “They could see a pathway to a possible deal.” Shortly afterwards, Irish sources said they believed the meeting had produced the basis for negotiations between the UK and the EU.

A day earlier EU chief negotiator Michel Barnier told the European Parliament, “We’re not really in a position where we’re able to find an agreement.” So what did Johnson and Varadkar agree that could be the basis of renewed negotiations?

The most difficult issue in the negotiations surrounds customs, with Johnson insisting Northern Ireland must leave the EU customs union with the rest of the United Kingdom. The EU has dismissed his proposal for a light-touch customs border with checks conducted at traders’ premises rather than on the Border and exemptions for small traders.

“It remains our position that there cannot be a hard border between North and South. And we must continue to have a situation whereby the all-island economy can continue to deepen and function well,” he said.

The EU does not, in fact, demand that Northern Ireland should remain in the EU customs union or that there cannot be two separate customs territories on the island of Ireland. But it will not accept customs checks between North and South, and it wants customs as well as regulatory checks on goods moving from Britain into Northern Ireland.

One option the EU could accept is a scaled-down version of the customs partnership proposed by Theresa May for the whole of the UK and the whole of the EU. The reduced version would apply only to Northern Ireland, which would leave the EU customs union and remain part of the UK customs territory.

Under the customs partnership, the UK would agree to enforce EU customs rules and tariffs on goods moving from Britain to Northern Ireland. But if the EU tariff was higher than the UK tariff, businesses in the North would receive a rebate.

So Northern Ireland would leave the EU customs union and would enjoy all the benefits of an independent UK trade policy. But the customs border for administrative purposes would run alongside the regulatory border in the Irish Sea.

Such a customs partnership creates potential headaches for both sides in the negotiations, but it is the only solution currently under discussion that could square the circle on customs and possibly form the basis of a deal.