North Macedonia’s birth hailed as boost for Balkans and Nato 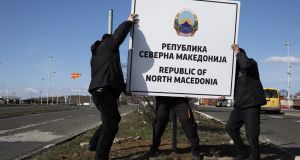 North Macedonia has officially come into being, allowing Skopje to take a seat at Nato for the first time, as its historic deal with Greece to end a grinding 28-year dispute finally took effect.

Workers began updating signs on the borders of the erstwhile Macedonia on Wednesday, after it formally published news of the name change in the government gazette and exchanged diplomatic notes on the matter with Athens.

This lays to rest Greece’s objections to its northern neighbour using the same name as a Greek region, which Athens said implied claims to the area and to the legacy of its ancient ruler, Alexander the Great.

The row blighted Greek relations with Macedonia since it gained independence from Yugoslavia in 1991, prompting Athens to veto its hopes of joining Nato and the European Union until it agreed to change its name.

A breakthrough came last June with the so-called Prespa agreement, which the parliaments of both countries ratified earlier this year despite widespread public opposition and occasionally violent protests by led by nationalist groups.

Macedonia signed an accession deal with Nato last week. It must be ratified by the bloc’s 29 member states, but already allows North Macedonian officials including defence minister Radmila Shekerinska to be invited to meetings of the alliance.

“This is a great moment for all of us. We really appreciate the progress you have made,” Nato secretary-general Jens Stoltenberg told Ms Shekerinska in Brussels on Wednesday.

“I have seen that yesterday the Nato flag was raised at government buildings in your country, in North Macedonia, and I really look forward to the day we can do the same . . . outside the Nato building.”

Ms Shekerinska said her presence at the meeting, which was made possible by the Prespa agreement, “is proof that political courage pays off and that change is possible, even in the Balkans”.

“We have shown that we are capable of finding the right solutions . . . and that we can make our region better and more stable.”

Polls suggest most Greeks oppose the Prespa accord and turnout for a referendum on the issue in Macedonia last year was too low for the vote to be valid.

Russia is also a strong critic of the agreement and accuses Nato of “dragging” North Macedonia and other Balkans states into the alliance; Greece expelled Russian diplomats last summer for allegedly trying to stir up opposition to the deal.

North Macedonian prime minister Zoran Zaev and Greek counterpart Alexis Tsipras staunchly pursued the western-backed accord, however, and reportedly have been nominated for the Nobel Peace Prize.

At the high-profile Munich security conference this week they will be given the Ewald von Kleist Award “for settling a decades-long dispute, thus opening up new opportunities for their peoples and for regional co-operation”.

North Macedonia must now notify the United Nations of its name change, replace signs at all border crossings and adapt digital state records as part of the Prespa deal.

Vehicle licence plates will also be changed and new passports and banknotes issued over the coming months.