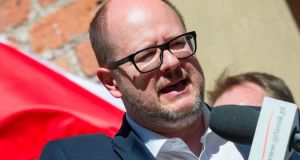 Polish state television has launched a series of lawsuits against the “lies and libel” of people who link its programming to the death of Gdansk mayor Pawel Adamowicz.

A month after Mr Adamowicz was fatally stabbed onstage at a concert, thousands gathered in the northern Baltic city to remember their mayor of 20 years. But the memorial service – shining a spotlight into the sky – was overshadowed by news of lawsuits by TVP against its most vocal critics.

They view the broadcaster as a propaganda broadcaster for the ruling Law and Justice (PiS) party. Last year, according to media analysis, TVP mentioned the regional mayor on average five times a day, almost always negatively.

It accused the liberal politician variously of being a Nazi, a communist, a supporter of organised crime and a propagator of ecological destruction, as well as an overtly pro-immigrant and “anti-Polish” politician.

In an interview, the mayor’s widow attacked public media employees for intimidating her family, including her mother at her workplace. Her husband, she added, had been bombarded by “hate speech” while in office, including from TVP.

“My husband was killed by words,” she said in an interview.

TVP hit back that her criticism was “damaging and unjust” because the man arrested for the stabbing had a history of mental illness. But the Adamowicz family, friends and political supporters argue he was radicalised by a permanent onslaught against the late mayor.

In launching its series of legal actions, TVP said it would “make an exception in the case of the widow” given she was in mourning.

Instead it started legal proceedings against a prominent musician, a lawyer, a newspaper journalist and the public ombudsman, Adam Bodnar.

In an online interview Dr Bodnar agreed that TVP coverage of the late mayor was “one of the issues that has to be examined” by a police investigation.

Although Mr Bodnar was speaking in his public role, and the summons was sent to the ombudsman’s office, TVP said it was suing in a private capacity the man whose role includes monitoring its broadcast standards.

As well as a paid apology in media outlets, TVP is demanding a donation to the charity behind the concert at which Mr Adamowicz was killed. In the past the charity was itself denounced by TVP and banished from its broadcast schedule.

Criticism of the station has grown since last month’s stabbing. A TVP report on political hate speech used soundbites from all political camps except the ruling PiS party.

A protest held outside the broadcaster last week almost turned into a riot and was roundly condemned by TVP. Later it emerged that a TVP employee, disguised in a fake beard, was among those stirring up the crowd with anti-government chanting.

Following the demonstration, TVP’s main evening news show published pictures and personal details of 10 participants – naming the street where they live and their employer.

The TVP row has seen government and opposition political figures weigh in on opposite sides.

European Council president Donald Tusk, a former Polish prime minister and friend of Mr Adamowicz, denounced “lies organised by the authorities” as a “dangerous form of violence, of which we are all victims”.

He was taken to task by President Andrzej Duda, an ally of the ruling PiS party, for using “very far-reaching comments” – stirring up further the emotive political atmosphere ahead of European and national parliamentary elections later this year.

On Wednesday two police were charged with leaking video footage showing last month’s stabbing, seen on the internet and on private station TVN.