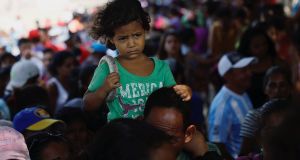 Venezuelans wait for a free lunch at a migrant shelter on the outskirts of Cúcuta, on the Colombian-Venezuelan border. Photograph: Edgard Garrido/Reuters

Pope Francis has reportedly rejected a request from Venezuela’s president Nicolás Maduro to mediate in the stand-off with his political opponents, saying he had failed to live up to commitments he made in previous efforts at negotiations.

The refusal and the reason for it were contained in a letter sent last week and published by Italy’s Il Corriere della Sera newspaper on Wednesday. The Vatican refused to confirm or deny the contents, saying it was a private letter.

“Unfortunately all efforts [at mediation] have been interrupted because what was agreed in meetings was not followed by concrete gestures to realise agreements,” the paper quoted the pope as writing.

A photo of the missive showed that Francis failed to address Mr Maduro as president.

Mr Guaidó has already ruled out holding negotiations with the Maduro regime, arguing it used past rounds of talks to buy time at moments of political crisis and as cover for ramping up repression at home. He has been recognised by more than 40 countries and has called on the Venezuelan military, one of Mr Maduro’s last remaining props of support, to abandon him.

The Vatican has long acted as an interlocutor in Latin American political disputes and Mr Maduro’s latest request was his fourth for Vatican mediation with the opposition in the last five years. A previous Vatican effort in 2016 ended in failure amid accusations of bad faith by the regime.

A round of negotiations supervised by regional states in the Dominican Republic at the end of 2017 also broke up in early 2018 in failure.

The leaked letter was quickly seized on by Venezuela’s opposition supporters as justification for Mr Guaidó’s refusal to enter new negotiations with the regime. The Lima Group of western hemisphere nations seeking a solution to the Venezuelan crisis has also ruled out talks and instead is demanding that Mr Maduro call fresh elections, something he is refusing to do.

He won a second six-year term last year in a vote that was widely denounced as illegitimate.

While refusing to confirm its authenticity, Venezuelan cardinal Baltazar Porras told local media the letter’s contents reflected the Vatican’s longstanding posture on mediation. While saying with Catholic Church was with neither Mr Maduro or Mr Guaidó, he described the National Assembly of which Mr Guaidó is president as “the legitimate power and elected by the people”.

Meanwhile Mr Guaidó is seeking to ramp up a humanitarian relief operation that saw his team agree with Brazil that aid will be sent to the Brazilian border state of Roraima, to complement the efforts already under way in the Colombian border city of Cúcuta.

Despite three million Venezuelans fleeing the country in search of food and medical assistance, the Maduro regime denies there is a humanitarian crisis in the country and says it will not let the aid in, leading to a stand-off at the country’s border with Colombia where US aid sits in warehouses on the Colombian side of the frontier.