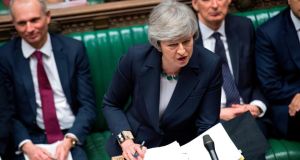 Theresa May faces the threat of a fresh defeat in the House of Commons on Thursday after hardline Brexiteers said they would not support her latest Brexit motion.

The motion expresses support for the approach to Brexit that MPs approved on January 29th, when they endorsed the prime minister’s deal on condition that the Northern Ireland backstop is replaced with “alternative measures”.

When MPs backed the government-approved Brady amendment that day they also approved an amendment tabled by Conservative Caroline Spelman and Labour’s Jack Dromey rejecting a no-deal Brexit. Conservative backbenchers in the pro-Brexit European Research Group (ERG) said on Wednesday they would not support a motion that ruled out leaving the EU without a deal.

“We cannot vote for this as it is currently configured because it rules out no deal and removes our negotiating leverage in Brussels. The prime minister, if she went through the lobbies for this tomorrow night, would be voting against the guarantees she has given in the Commons for months. It is madness,” the ERG’s vice-chair Mark Francois told the BBC.

Mrs May told MPs this week that if she has not put a Brexit deal to the House for a vote by February 26th she will table another amendable motion for debate on February 27th.

Labour has tabled an amendment to Thursday’s motion that would oblige the government to hold a “meaningful vote” on a Brexit deal by February 27th or admit there was no deal and make a statement about what happens next.

Downing Street on Wednesday declined to comment on a report of comments Brexit negotiator Olly Robbins was overheard to make in a Brussels hotel bar.

According to an ITV News report, he said that days before the March 29th deadline for Britain to leave the EU, Mrs May will give MPs a choice between backing a tweaked version of her deal or a long extension of the article 50 negotiating period.

In Westminster on Wednesday, Sinn Féin president Mary Lou McDonald said there could be no renegotiation of the withdrawal agreement, and warned the Taoiseach against any compromise on the backstop.

“I think the stakes are so high that the Taoiseach has to hold firm. I think he knows that,” she told The Irish Times.

Ms McDonald was speaking after a meeting with Jeremy Corbyn, who has criticised the backstop because it would create new regulatory divergence between Great Britain and Northern Ireland. She said she told the Labour leader that the backstop was “the bare minimum” to protect Irish interests after Brexit.

“We shared with him our strong belief that there is no appetite to reopen the withdrawal agreement, including the Irish protocol, and our anxiety about the fact that the clock is now ticking.

“We’re only six weeks away, and the only thing that Mrs May is achieving by talking down the clock is to heighten tension and anxieties.”

A Labour spokesperson described the meeting, which was also attended by Sinn Féin’s Northern leader Michelle O’Neill, as “wide-ranging and useful”, with both sides agreeing that a no-deal Brexit should be ruled out and there must be no return to the borders of the past in Ireland.