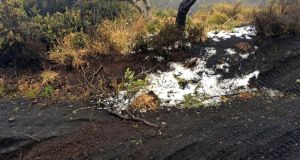 Black volcanic cinders are covered with a dusting of snow at the Polipoli State Recreation area on the slopes of Haleakala near Kula on the Hawaii island of Maui. Photograph: Brent Edwards/AP

California is bracing for its wettest storm of the winter as the “Pineapple Express” is set to dump heavy falls of rain and snow on areas of the state, raising risks of flooding and mudslides, meteorologists said.

The weather system, known as an atmospheric river, gets its name from the flow of moisture that periodically heads east from waters adjacent to the Hawaiian Islands to soak the US West Coast.

It blanketed parts of Hawaii with snow over the weekend and was expected to drench California this week.

Officials said a blanket of snow in Polipoli Spring State Recreation Area in Maui is likely to be the first for any state park in Hawaii and is possibly the lowest elevation snow recorded in the state.

The San Francisco Bay area could be hit by flash flooding and falling trees as saturated ground gets up to 20cm more rain and strong winds blow in, the National Weather Service said.

To the northeast in the Sierra Nevada Mountains, passes could see between up to 2.5m of snow through Friday.

The system was among multiple winter storms hammering the United States from Seattle to Boston, causing commuter headaches and risks of power outages for millions of Americans.

Seattle had its snowiest month in 50 years after being hit by three winter storms in February, according to AccuWeather. -– Reuters