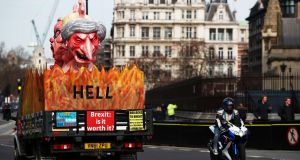 A lorry carrying an effigy of Theresa May passes outside the Houses of Parliament, in Westminster. Photograph: Hannah McKay/Reuters

Thursday’s Brexit debate promised to be plain sailing for Theresa May after she told MPs this week they would have another chance to vote on an amendable motion on February 27th.

Labour’s Yvette Cooper decided to wait until then to revive the most dangerous amendment for the prime minister, which would allow MPs to take control of the Brexit process.

But last night saw Conservative chief whip Julian Smith negotiating with hardline Brexiteer backbenchers who were threatening to inflict a humiliating defeat on the government. The motion looked innocuous, stating that the House “reiterates its support for the approach to leaving the EU expressed by this House on January 29th, 2019, and notes that discussions between the UK and the EU on the Northern Ireland backstop are ongoing”.

MPs on January 29th approved Graham Brady’s amendment offering support for May’s Brexit deal on condition that the Northern Ireland backstop be replaced by alternative arrangements to ensure that the Border remains open. But they also voted for a non-binding amendment tabled by Conservative Caroline Spelman and Labour’s Jack Dromey that opposed a no-deal Brexit.

Brexiteers suggest that the government’s motion implies that the House rules out a no-deal Brexit as well as backing the approach to Brexit outlined in the Brady amendment. They are right to be suspicious because the prime minister has already defined the Brady amendment downwards to allow for a change to the backstop rather than its replacement.

Overheard in a bar

Olly Robbins, the civil servant who leads the British negotiating team, was overheard in a Brussels hotel bar suggesting that the prime minister would wait until there were just days to go to the March 29th deadline before presenting MPs with a choice between her (tweaked) deal and a lengthy postponement of Brexit.

May’s visit to Brussels last week persuaded the EU side that she was determined to play the negotiations long, with the endgame pencilled in for the next scheduled meeting of the European Council on March 21st. That timetable suits the EU too, as the commission and member states wait to see how events at Westminster play out.

Even if May wins the vote on Thursday, any concession to the Brexiteers will reinforce the view among many on the EU side that she cannot sustain a stable majority for a Brexit deal based solely on Conservative and DUP votes. The EU is unwilling to reopen the withdrawal agreement to change the backstop but it is prepared to be more flexible if the prime minister shifts her red lines and embraces Labour’s proposal for permanent customs union membership and close alignment with the single market.

A defeat for the prime minister on Thursday would weaken her hand in Brussels and strengthen those on the EU side who are most patient and unyielding.