Superstar judge emerges as an unlikely champion for liberals

America Letter: 85-year-old Ruth Baden Ginsburg has vowed to remain on the bench for another five years to the delight of her fans 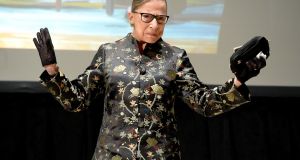 Sometimes heroes come from the most unlikely places. For millions of progressive Americans who continue to look on aghast at Donald Trump’s presidency, there was some good news this week.

On Sunday night, Twitter lit up with breaking news.

Supreme court justice Ruth Bader Ginsburg had just suggested during an interview in New York that she would stay on the bench for at least five more years.

The joy was unfettered. #RuthBaderGinsburg was trending on the social media platform, while fans across the country expressed their joy. “I hope you live forever, RBG,” said one.

The 85-year-old Ginsburg has become an unlikely champion of liberals across the country, attracting a cult-like following usually reserved for pop stars or celebrities.

The roots of her fame began at the start of this decade. After a number of dissenting judgments, including in the famous Shelby County v Holder case on voting rights, she was incarnated as an internet meme, which compared her to the rapper Notorious BIG.

Such was the meme’s popularity that its creator teamed up with an MSNBC journalist to pen a book, Notorious RBG: The Life and Times of Ruth Bader Ginsburg. It became a New York Times bestseller.

Earlier this summer a film adaptation of the book hit cinemas across the US, cementing her celebrity. Outside the movie theatre in Georgetown fans queued up outside the lifesize cardboard cutout of RBG for photos.

The film recounts the story of Ginsburg’s life, tracing her career trajectory from her upbringing in a Jewish household in Brooklyn in the 1930s to her appointment by Bill Clinton to the supreme court in 1993.

Having graduated from Cornell, she went to Harvard Law School, one of nine women in the 500-strong class. She recounts in the film how she was scolded by a dean for taking a seat that could have been occupied by a man. These early experiences of prejudice informed her career as a lawyer.

In the 1960s and 1970s she rose to prominence, taking on – and winning – landmark cases on gender equality. She argued six gender discrimination cases before the US supreme court between 1973 and 1976, including a case which successfully argued that widowers – as well as widows – should be eligible for social security payments if they choose to mind children in the home after the death of a spouse.

While the film charts Ginsburg’s remarkable career, it also sheds light on her personal life.

Throughout the film, Ginsburg’s natural reserve and seriousness comes through, an antidote to the gregarious personality of her late husband, who remained a constant presence by her side before his death in 2010. But it shows how the elegant octogenarian has embraced her recent fame with a bemused, tongue-in-cheek air.

The film includes footage of the justice working out with her personal trainer, and watching Saturday Night Live impersonations of herself on TV.

Her friendship with the late Antonin Scalia, her colleague on the supreme court, is also explored. Their friendship, despite their very different political leanings, is a reminder of the importance of bipartisanship at a time when America is so divided politically.

Ginsburg’s promise to remain on the bench for at least five years has been greeted with relief by her fans, amid concerns about her health in recent years. She has survived cancer, twice, and was famously caught napping during the State of the Union address in 2015.

Trump has so far been gifted the appointment of two supreme court nominees – Neil Gorsuch and Brett Kavanaugh, who is expected to be confirmed by the senate in the autumn. Liberals do not want the 45th president to have the opportunity to nominate a third.

Ginsburg’s comments this week emerged as Kavanaugh continued to meet privately with senators on Capitol Hill as Washington starts to wind down for the summer. His confirmation hearing is expected to take place next month, with Republicans aiming to have the conservative nominee in place by the opening of the new court session on October 1st.

While Kavanaugh is likely to face a tough confirmation hearing – his statements that he does not believe sitting presidents should be prosecuted have raised eyebrows – Republicans have the majority needed to approve him.

Ginsburg, however, seems willing to stick the pace until a Democratic president is in place. For many, it is proof that she is a real patriot.