New hotels are springing up across the city, catering to both the luxury and price-conscious ends of the market 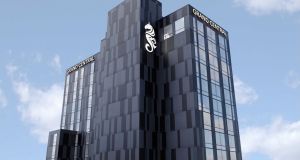 Belfast once boasted the most bombed hotel in Europe. It was arguably the only claim to fame its hotel sector had during the dark days of the Troubles.

Now the city’s hotel sector is booming, with unprecedented demand: 2.26 million room nights were sold in 2017. New hotels are springing up across the city, catering to both the luxury and price-conscious ends of the market.

The most recent high-end additions include the Hastings Hotels’ Grand Central, opened its doors last month. The £53 million (€60 million) 23-storey development in the city centre, boasts an “Observatory” cocktail lounge on its top floor, claiming to be Ireland’s highest bar, letting patrons sip cocktails or enjoy afternoon tea with views of the Titanic Quarter and the Black Mountain.

In the same week, the AC Hotel opened, marking the first foray in the North by US hotel chain Marriott. The £26 million 188-bedroom hotel at City Quays on Belfast’s Waterfront boasts the first restaurant operated in Ireland by the multi-Michelin-starred celebrity chef Jean-Christophe Novelli.

These join an already buzzing sector that boasts the Fitzwilliam, the Europa, the Merchant, the Hilton, and other offerings such as Bullitt, House, Mal Maison, The Flint, The Maldron (owned by Dublin-listed company Dalata) and Park Avenue.

Hotel development in Belfast is surging with new places for visitors to stay popping up all over the city.

Despite the ongoing political stalemate at Stormont, the North continues to benefit from the peace dividend, along with internationally-renowned tourist attractions such as Giant’s Causeway and the Titanic Museum.

The Park Avenue Hotel, one of Belfast’s oldest, with the Marco Pierre White restaurant brand, is still going and last year the city saw the opening of the £28 million Titanic Hotel, beside the maritime visitor attraction that regularly tops the most visited destinations in the North.

It offers a place to stay in the city’s Titanic Quarter, where the burgeoning film industry has made its home, and which is expected to witness huge levels of development in the coming years.

“We are delighted to be part of the new tourism offering in Belfast, a city that is thriving with visitors from around the world,” said Titanic Hotel’s general manager Adrian McNally.

“Since opening, we have welcomed over 36,000 overnight visitors to the hotel, with room capacity reaching over 80 per cent in the past six months. We’re looking forward to our first summer at Titanic Hotel Belfast, welcoming visitors from around the world.”

According to Michael Williamson, a partner at ASM consulting services, which is based in Belfast and specialises in hospitality and tourism, demand for hotel accommodation has been very strong since 2012 with occupancy rates at 75 per cent and above.

Last year, both average room rates and revenue per room increased, with the uplift showing in boosted profits for developers.

Williamson said the integrated conference and exhibition space development at the Waterfront Hall opens up a new market for Belfast. During the 2008 to 2010 recession you could have a standalone conference in Belfast but there was no exhibition space and therefore you could not subvent the cost to delegates.

“We didn’t have that space so were ruled out of the market,” he said. “The Waterfront Hall development has opened that up, so it is a new market that has opened up for Belfast.”

Unless there is a major Brexit-related or world catastrophe there is no reason to expect that tourism will not continue to grow, he said.

At present 5.2 per cent of the GDP in the North is tourism related, but it lags behind Britain and the rest of Ireland where it is around 9 to 13 per cent.

“Just to compete on level terms with our neighbours we have an awful lot of room to grow into,” he said.

He estimates that the North’s tourism sector has the opportunity to double in size. “Tourism is growing on a global scale, the cake is getting bigger. We need that spread of accommodations types and sizes”.

Belfast also needs to appeal to a broad range of markets such as younger tech savvy visitors, older tourists, and conference visitors. But it’s not just Belfast that needs to put its best foot forward: the rest of the North needs to focus on improving its offering as well, Williamson said.

Hotels in rural settings and those offering leisure and spa facilities had a very strong year recording average bedroom occupancy rates of 71.3 per cent and 76.3 per cent respectively - both up on 2016.

He references Derry as being something of a star of late. The latest report from ASM on the sector shows that Derry, typically stymied by low levels of demand during the winter season and relatively low room rates for most of the year, saw its bedroom occupancy rate for 2017 average 70.7 per cent, while room rates increased by 15.7 per cent year-on-year to an overall average of £67.15.

According to Williamson, while the decline in the value of sterling on the back of the Brexit referendum result in June 2016 boosted competitiveness in the second half of that year, “there was some modest level of recovery in sterling in 2017 and it is reassuring that despite this, the demand for hotel accommodation hit record levels”.

This suggests that Northern Ireland as a destination has more substance to it than simply being good value, he said.

“There has been a tendency for the local industry to rely too heavily on domestic demand in my opinion, so it is reassuring to see the volume of bookings by out of state tourists increased in 2017. There was growth in the number of hotel guests from north America, Europe, Ireland and Asia, evidencing the general upward trend in out-of-state visitors recorded in official tourist statistics. This trend is important because it is well recognised that out-of-state visitors stay longer and spend more each day than is the case for domestic tourists.”

Williamson notes that there are half a million scheduled airline seats coming into Ireland. However, roughly 450,000 go into the Republic so Belfast has work to do to compete.

“People are coming to the island,” he said. “They know we exist. We just need more of them to come across the Border.”

A case in point says Mr Williamson is the active moves by the North’s hotels to be “China ready”.

“The beauty of that market is it is a high spend market,” he said, although there was disappointing news this week that China carrier Hainan is scaling back its flights to Dublin this winter having only just launched the services.

Hotel development tends to come in waves, so after the current surge Williamson expects a slow down in activity. “By 2020-2021 we should see hotel occupancy rates to be back to the level they are at today and then we will need another flurry of development,” he said.

The Beannchor Group owns two properties in Belfast - the Merchant and Bullitt Belfast, as well as the Little Wing Pizzeria chain and more than 40 licensed premises across Northern Ireland. The Merchant opened 12 years ago and is positioned as Belfast’s most luxurious five-star hotel.

Managing director Bill Wolsey said: “With new entrants coming into the city, the market continues to be competitive, but we are confident that the offerings of both The Merchant and Bullitt are distinctly different to our competitors.”

The Merchant is still the only AA Red Five Star property in Northern Ireland and Bullitt Belfast claims to have “turned the sleepy 4-star model on its head”, by bringing something fresh to the market.

“We will not rest on our laurels though. We will constantly strive to improve and we will invest in our portfolio to ensure we stay ahead of the curve,” Mr Wolsey said. “We are optimistic about the outlook and continue to explore further opportunities for expansion, both here and outside Northern Ireland.”