On Thursday Donald Trump ramped up his attack on the media during an appearance in Pennsylvania when talking about reports on his meeting with the Queen. Earlier, CNN's Jim Acosta had clashed with White House press secretary Sarah Huckabee-Sanders. 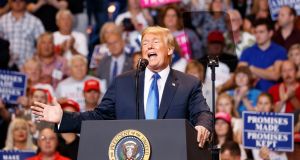 US president Donald Trump during a political rally on Thursday. Photograph: Carolyn Kaster/AP

US president Donald Trump ramped up his attack on the media on Thursday night, criticising the press as “fake, fake, disgusting news” and describing journalists in attendance as “horrible, horrendous people”, despite UN experts warning earlier in the day that his actions were putting journalists at risk.

Nominally appearing in Wilkes-Barre, in Pennsylvania, to support a Republican candidate for the US Senate, Mr Trump instead spent more than 15 minutes listing a series of grievances with the press, inducing angry chanting from the crowd towards the assembled media.

Mr Trump’s most intense criticisms came during an anecdote about the latter. Mr Trump said he and the Queen “got along fantastically well” and enjoyed “good chemistry”, but told the thousands-strong crowd that the “fake news” had instead reported that he turned up late.

“They can make anything bad. Because they are the fake, fake, disgusting news,” Mr Trump said.

The insult prompted wild applause, as did his series of other denunciations of the press, which Mr Trump continued despite widely shared videos showing the crowd at a Trump rally in Florida on Tuesday using aggressive language and gestures towards the CNN correspondent Jim Acosta.

During the middle of his speech on Thursday, Mr Trump pointed to the press area in the middle of the arena as he recalled the scepticism around his chances of victory in November 2016.

“Even these people back there, these horrible, horrendous people,” Mr Trump said, would agree “there has never been anything like what happened in November”.

Earlier in the day UN experts had warned that Mr Trump’s rhetoric could “increase the risk of journalists being targeted with violence”, while his daughter, Ivanka Trump, said that, unlike her father, she does “not consider the media the enemy of the people”.

The level of hostility on Tuesday had been such that Mr Acosta later tweeted that he was “very worried that the hostility whipped up by Trump and some in conservative media will result in somebody getting hurt”.

On Thursday, Mr  Acosta had clashed with White House press secretary Sarah Huckabee-Sanders, repeatedly asking if she disagreed with Mr Trump’s view of the press as the “enemy of the people”. Ms Huckabee-Sanders declined to answer.

Mr Trump was appearing at the Mohegan Sun Arena in Wilkes-Barre, in a bid to boost Lou Barletta, a congressman running for the Senate. Mr  Barletta was one of the first members of Congress to endorse Mr Trump for president and has remained a firm supporter.

Mr Barletta is currently trailing his opponent, the incumbent Democrat Bob Casey, by an average of 16 points in the polls, and had just $1.6 million (€1.4 million) cash on hand at the end of June compared with Mr Casey’s $9.9 million (€8.5 million).

During his lengthy diatribe Mr Trump referenced his meeting with North Korea’s Kim Jong-un - which was widely criticised as having achieved little - in furthering his characterisation of the media and “fake news”. Mr Trump claimed he had returned to DC from the Singapore summit and told his wife, Melania, that he was excited to see the media coverage.

“I just stopped missiles from being launched every two seconds,” Mr Trump quoted himself as saying to his wife.

“`And baby, I got the hostages back’,” Mr Trump said. “`And you know what, honey, they’re not testing any more nuclear.’”

“Oh the media is gonna finally treat me so good,” Mr Trump recalled himself saying. “I’m looking forward to waking up tomorrow and reading those dying papers.”

Instead, Mr Trump said, he faced “only negativity” from the “fake news”.

Turning to his widely criticised meeting with Vladimir Putin in Helsinki, Mr Trump again said the coverage had been unfair. “They wanted me to go up and have a boxing match,” he said of the media’s reporting of his cowed performance alongside Mr Putin, as the crowd roared.

The crowd was particularly hostile to CNN - of whom Mr Trump has been most critical - but as the president continued his lengthy aside the angry boos, shouts and downturned thumbs were directed to almost all of the journalists packed inside the small media zone.