It’s been a turbulent political week in Zimbabwe, where the ruling Zanu-PF party retained power under questionable circumstances 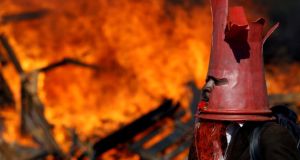 A supporter of the opposition Movement for Democratic Change party (MDC) of Nelson Chamisa wears a cone as they block a street in Harare, Zimbabwe, on August 1st, 2018. Photograph: Reuters/Siphiwe Sibeko

Even though Zimbabwe’s general election environment was largely peaceful in the run-up Monday’s historic vote, the chances were always high that the hotly contested poll would be engulfed by controversy and violence.

Long-standing hostilities between the two main political parties vying for power date back to when the main opposition Movement for Democratic Change (MDC) was formed in 1999, and this ensured tensions were never far from the surface ahead of the ballot.

Add to that mix an impoverished and vulnerable electorate desperate for political and economic change, and you had a powder keg of pent up frustration and anger waiting to explode. All it needed was an incendiary situation to light the fuse.

That incident arrived on Wednesday when an alliance of five opposition parties led by the MDC accused the authorities of rigging the election in favour of the ruling Zanu-PF party, after official results showed the latter had easily won the parliamentary vote.

Zanu-PF secured 145 of the 210 seats in parliament and the MDC Alliance got 60 seats, according to the Zimbabwe Electoral Commission, the election’s oversight body which stands accused of being partisan.

Alliance spokesperson Nkululeko Sibanda called the result “a gimmick” designed to “try and prepare Zimbabwe for a rigged election”.

On Thursday the opposition alliance also accused the electoral commission of delaying the presidential result’s release by three days so it could manipulate it in favour of Zanu-PF’s candidate, Emmerson Mnangagwa.

Although there were 23 candidates in the presidential election, his main rival was MDC Alliance leader Nelson Chamisa, a 40-year-old swashbuckling lawyer and orator.

A cunning party hardliner known locally as “the Crocodile,” Mr Mnangagwa (75) was appointed Zimbabwe’s interim leader last December after former president Robert Mugabe was ousted in a military takeover the month before.

To attract billions of dollars in much-needed foreign investment he had promised free, fair and credible elections, and invited hundreds of international observers to oversee the poll from beginning to end.

This stand-off quickly descended into bloodshed

When the official presidential result finally did emerge late on Thursday, it gave Mr Mnangagwa a narrow victory in which he won 50.8 per cent of the vote to Mr Chamisa’s 44.3 per cent.

For the MDC a sense of déjà vu must have set in, as the opposition party believes Zanu-PF has rigged every election in the country since 2002.

Suspicious that the electoral commission would try to fiddle the numbers behind the scenes in Zanu-PF’s favour again, it had undertaken its own parallel vote count at most of the near-11,000 polling stations across the country.

And these results, it said, showed their candidate had easily come out on top. This prompted the MDC Alliance to announce Mr Chamisa as Zimbabwe’s new president ahead of the release of the official result, in open defiance of the electoral law.

This attempt to exert some control over the situation raised the stakes even higher, and in hindsight the election was only ever going to go downhill from there.

Believing that the ruling party was trying to rig the poll again, hundreds of incensed MDC Alliance’s supporters marched on downtown Harare to protest defiantly outside the electoral commission’s headquarters.

This stand-off quickly descended into bloodshed, when armed police and soldiers decided to use live ammunition on a volatile crowed that initially appeared immune to teargas and water cannons.

Zimbabwe’s state-run broadcaster, the ZBC, reported that three people died and dozens were injured in the running battles that ensued throughout the afternoon, although the independent News Day newspaper stated the death toll was closer to six.

Shortly after the protesters were dispersed by the authorities, the MDC Alliance and government blamed each for the clashes.

MDC spokesperson Linda Masarira condemned the army’s heavy handedness, given the civilians they faced were unarmed. “The right to demonstrate is enshrined in section 59 of the constitution,” she pointed out.

But Mr Mnangagwa insisted the MDC Alliance was responsible for the disturbance, which was designed to “disrupt the electoral process,” and blamed the loss of life on its leaders.

We want change in so many different ways

A crackdown on opposition leaders ensued, and police raided their party headquarters in search of “dangerous weapons”. In total 74 people were subsequently arrested, according to local media reports.

To understand why largely peaceful civilians would face down tanks, water cannons, and armed soldiers and police, it is instructive to understand the political and economic environment they live in.

Once known as the “Bread Basket of Africa,” the unworkable economic policies and systems of patronage that Mr Mugabe and Zanu-PF installed to help keep them in power from the 1990s onwards drove the once thriving economy into the ground.

On election day in Mbare, a township in Harare, MDC Alliance supporter Mabel Maponga told The Irish Times that unless real change was achieved, Zimbabwe’s future would remain as bleak as its recent past.

“We want change in so many different ways,” she explained, “We need jobs, our children don’t go to school, there is no money in the banks, and so many of the young are forced into prostitution to survive from day to day.”

During the MDC Alliance’s last campaign rally last Saturday in Harare’s Freedom Square, which attracted an enthusiastic crowd of over 100,000 supporters, the Zimbabwean youths’ desperation to break with the past was even starker.

Passionate and articulate, the young men and women in attendance nearly tripped over each other to explain to journalists why the MDC Alliance was their only hope of a deliverance from poverty.

“I can’t afford to get married or have a family because I cannot support them,” he lamented before going to say that most young university-educated people could not find work. “That is our major frustration, and that is why we cannot lose this poll”.

Another 24-year-old man who would not give his name insisted that if it looked like Zanu-PF was stealing the election, they would “defend their vote,” because it was “better to die a hero than live like a coward in poverty”.

So, despite Wednesday’s efforts “to protect” the opposition’s vote, Zanu-PF looks to have retained power for the next five years, although the MDC Alliance will no doubt challenge the election’s outcome legally in the weeks ahead.

Whether it will lead its supporters back into the streets for more protests, given what happened this week, is far less certain.

But they are unlikely to be the only losers in this disputed election.

The violence perpetrated by the army against civilians will also undermine Mr Mnangagwa’s efforts to move the southern African country out of international isolation, and observer groups from the West have already question the poll’s credibility.

US observers have said that the poll had “not made the mark” in terms of being free and fair.

This may well damage the country’s chances of attract the money needed to revive an economy on the brink of collapse, as stability and the rule of law are fundamental to investment being forthcoming.

In addition, it seems the deep political divisions that dominated the pre-election landscape will remain open sores, which will further undermine the unity needed to turn the country around.

Indeed, rather than the stability and economic growth they crave, Zimbabweans may well be left with more uncertainty for the next five years, as well as the same ruling elite that brought them to their knees.