Post-Brexit era arts: Will they bask in an harsher spotlight? 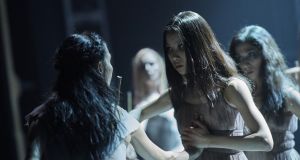 The not-for-profit group Business to Arts highlighted the potential upheaval arts organisations might experience from Brexit during a recent panel discussion before Akram Khan’s Giselle. English National Ballet artistic director Tamara Rojo spoke of the obstacles her company already must overcome when travelling internationally, and which could intensify for many others under Brexit.

“We have dancers of more than 20 nationalities, and while most of them are from the UK, they do come from all over the world,” said Rojo. This currently means securing separate visas for non-EU dancers when travelling outside the EU, and a hard Brexit potentially could require obtaining visas for each of the 69 dancers when travelling between the UK and Europe. Despite the amount of paperwork and advanced planning needed when getting people from one point to the next, she said moving people is easy when compared to moving multi-tonne sets. (According to Bord Gáis Energy Theatre general manager Stephen Faloon, the set for Khan’s Giselle required five separate 45ft trucks in order to be transported to the Dublin venue.)

“When we travelled with Giselle to Asia and New Zealand, at one point our set got held up in customs,” Rojo explained. “We have a really good technical director who handles all of these things and who is always very calm, but this time he was freaking out and I thought to myself, ‘I think I should be worried.’” The set cleared customs less than an hour before it was meant to go onstage. Rojo and others on the panel expressed concern that these scenarios might become more common for arts groups travelling between the UK and Europe under Brexit.

“We have to have a balanced opinion about positives and negatives, and realise there’s a degree of opportunity here,” Hetherington says. “For instance there could be greater EU funding to Ireland as a result of the UK no longer being in the European Union. There are potential opportunities for co-productions across borders as well.”

Hetherington’s first recommendation is for arts groups to perform a risk assessment to see how they might be affected by Brexit. Then they should look at diversifying audiences to account for the lower number of UK visitors already being recorded.

“Your preparation for Brexit has to be in proportion to the size and complexity of your UK activity,” he continues. “Most Irish arts organisations are small to medium-sized with three to five people. The biggest issue typically is human resources and the amount of time that can be allocated to this type of planning. That is the challenge.”

Colm O’Callaghan, a partner at PwC, urges arts and cultural organisations to think strategically and begin planning now, no matter what their size. “It doesn’t matter what industry you’re in. The panic will come if you don’t think it through. Every business needs to prepare a risk assessment and ask things like, ‘Do I have UK-based suppliers? What contracts do I have coming up in the next 12-24 months? Do these contracts have a Brexit clause?’ Then think about goods and products moving between the two countries, such as sets and costumes, and whether there is duty to be paid on equipment being brought in.”

O’Callaghan particularly cautions smaller organisations and individuals to stand up for themselves when doing business under new Brexit laws.

“The smaller you are, the more likely you are to take the resources you are given,” O’Callaghan explains. “To give a practical example in the business realm, if you are an SME in the food and beverage industry delivering to large UK multiples, I can guarantee they would have the ability to own some of the higher costs associated with Brexit, but they might ask the SME to take those on. If it puts a strain on your business, be mindful. You may not have the ability to absorb those costs. You will be squeezed. Plan ahead and ask the bigger affiliate to absorb at least some of them.” When approaching these negotiations, utilise resources such as your Local Enterprise Office, Enterprise Ireland and your accountant for advice, he adds.

Business and arts leaders agree that some of the initial alarm over Brexit has subsided, providing time between now and 2019 to prepare for and consider potential opportunities. Susan Kirby, chief executive of St Patrick’s Festival, says that in addition to addressing the tangibles that will affect her organisation such as visitor statistics and exchange rates, her team is nurturing existing and potential partnerships.

“One issue for us is EU funding, although I believe that can be seen as an opportunity as well as a potential threat,” Kirby says. “Very regularly in funding it’s encouraged to enter partnerships, and a lot of our partnerships are in the UK. It is a fact that, as our neighbours we know them well, so their not being applicable is a disappointment. But it may be a potential for Ireland.

“We realise the festival is an event but it’s also a period of time,” she adds. “We are very interested in using the festival as an opportunity to reinforce the ties between Ireland and the UK. It’s a time of economic diplomacy, and we’re keeping an eye on that.”

John McGrane, chairman of the British Irish Chamber of Commerce, believes arts organisations may be in a better position than they anticipate when it comes to weathering Brexit. “We all know arts organisations can wipe the floor with their ability to operate efficiently on a very tight budget,” McGrane says. “And they are very well-networked.” He advises arts and cultural leaders to start thinking now on how to use those qualities to their advantage.

He thinks the cultural sector may also benefit from companies deciding to shift their operations away from the UK to Ireland. “When all the economic factors of moving are equal, chief executives must ultimately make a lifestyle choice on where to base their business,” he explains. “It’s about making a life as well as a living, and arts and culture are so fundamental to that. They are things we might sometimes take for granted, but if ever there was a time for arts and culture sector to be at the forefront, it’s now.”

Each member of the Business to Arts panel at Giselle acknowledged a significant amount of uncertainty as Brexit continues to unfold. Faloon said Giselle took two years of steady planning and negotiating to bring to the Bord Gáis Energy Theatre, and that discussions were already under way for bringing the English National Ballet back in 2020 – coinciding neatly with the onset of Brexit.

No matter what form it takes, Brexit will likely result in more paperwork, use of greater resources and higher costs for arts and cultural organisations – costs Faloon and other arts leaders hope to avoid passing on to the ticket buyer. Still, they remain cautiously optimistic about Brexit’s impact on the arts in Ireland.

“We are all proceeding on the basis this will all be okay,” Faloon says. “I think you have to. At this point with so many unknowns, I think we all feel that is the only way.”

Lewis Capaldi: ‘I’m not Justin Bieber or Ed Sheeran – I’m not getting chased down the street’
9