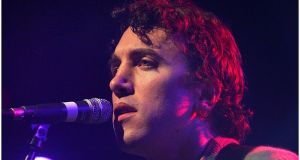 With all due respect to David Kitt’s elegy about the “sadness of so many creative/artistic/bright people being forced to leave the city”, the people being hit hardest by the city’s housing crisis are not members of the “creative community” but the poorest people with the fewest options. Photograph: Brenda Fitzsimons

Musician David Kitt has had to pack up his rental troubles in his old kit-bag and learn how to smile, smile, smile in whatever suburb or regional city awaits the newly minted troubadour. He can take solace in the fact that he’s not the first – and won’t be the last – to learn that when it comes to urban revival, as Bob Dylan would have it, “there’s no failure like success”.

Kitt tells us that he has been forced out of living in Dublin because where he currently lives is being sold and the rents in the city are too prohibitive for a musician of his means.

He adds: “It’s sad that so many creative/artistic/bright people are being forced to leave this city and the country in general.”

Kitt, and by extension Dublin, is now experiencing a phenomenon which has had the creative classes in London and San Francisco weeping into their soy lattes for some time now.

Urban planning policies which claimed that the clustering of young creatives and tech workers together in cities would lead to greater economic prosperity have now been exposed (after a few giddy years of hipster cafes and look-at-me loft-living) as merely favouring the already-rich. They enable soaring house prices and also displace “bohemians” – which might not be entirely a bad thing.

Even the Godfather of Gentrification, the US urban policy tastemaker, Richard Florida, is now rowing back on his add-water-and-mix urban planning edicts as more and more cities far from being open, vibrant and creative idylls now flaunt their gated communities and are punctuated at most every corner by Airbnbs.

Florida’s grande idée as contained in his 2002 bestseller The Rise of the Creative Class was to embrace the three T’s of “technology, talent and tolerance”. Make your city hipster friendly, have a vibrant arts and music scene and lively cafe culture and cconomic growth would follow, he argued.

The synergy of creatives, bohemians and cosmopolitans would lift cities out of post-industrial decay and turbo charge their economies. As for the “uncreatives” – they just get moved off to an area with little or no exposed wood/copper cutlery.

What we now know is that when you make a city – or parts of it – “cool”, the uncool people with bigger bank balances descend on it and wreck the “authentic and artisanal” community buzz. It all becomes a Sisyphean nightmare and begets a winner-takes-all urbanism.

Greenwich Village in New York built its bohemian reputation on its artistic inhabitants; when those frightful hedge fund manager types began to move in and rent and house prices soared, the artists moved on to the cheaper East Village and when that was colonised by new money squares, it was onwards again to Williamsburg in Brooklyn. Now Staten Island is being marketed as “the new Williamsburg”.

And in turn, some industrial estate in New Jersey will become the “new Staten Island”.

Hackney in London has had the same trajectory - from edgy and interesting to a pompous, Farrow and Ball enclave with a gelateria on every street corner. In Dublin we’re not too far off the day when parts of Dublin 6 begin to be described as the “new Kreuzberg” .

Florida might have Dublin in mind when he published his mea-culpa of sorts last year. His book is called The New Urban Crisis: How Our Cities Are Increasing Inequality, Deepening Segregation and Failing the Middle Class.

The man, scathingly known to his critics as “The Patron Saint of Avocado Toast”, has softened his cough somewhat. As he writes in his new book “I found myself confronting the dark side of an urban revival that I had once championed and celebrated”.

He now talks of a “winner-take-all urbanism” and how the most creative cities in the world (eg New York and San Francisco) are also the most unequal.

What Dublin needs is not some exciting nightclub space/poetry pop-up places/“vibrant and exciting” music scene etc that gets us a ranking on the now discredited bohemian living index but in Florida’s own words: affordable housing and an increase in the minimum wage.

With all due respect to Kitt’s elegy about the “sadness of so many creative/artistic/bright people being forced to leave the city”, the people being hit hardest by the city’s housing crisis are not members of the “creative community” but rather the poorest people with the fewest options.

After all, boring is the new bohemian.