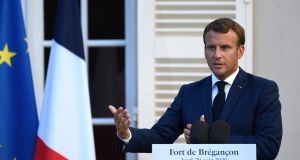 French president Emmanuel Macron said that while ‘we are living through a time of crises’, the Covid-19 trouble is chief among them. Photograph: Getty

French president Emmanuel Macron and German chancellor Angela Merkel demonstrated near total harmony in their approach to great crises of the moment when they met in France on Thursday.

The issues included the Covid-19 pandemic, repression in Belarus, the poisoning of Russian opposition figure Alexei Navalny, tension between Turkey, Greece and Cyprus, the war in Libya and the coup d’etat in Mali.

“Europe is strong when it speaks with one voice,” said Dr Merkel said at a press conference with Mr Macron at the president’s summer residence at Brégançon near Toulon.

French commentators rejoice in what they see as new willingness by Germany to embrace foreign policy issues following decades of reticence after the second World War.

Last month’s agreement on a €750 billion European recovery fund is seen by both countries as a triumph of Franco-German co-operation and growing European sovereignty.

“This visit is the sign of an exceptional level of convergence and shared Franco-German engagement on bilateral, European and international levels,” said the Élysée.

Mr Macron and Dr Merkel have both talked to Russian president Vladimir Putin in the hope of defusing the crisis in Belarus, which is under Russian influence. The EU Council on Wednesday refused to recognise what it says was the fraudulent re-election of Alexander Lukashenko, who is known as the last dictator in Europe and has been merciless in repressing protests.

“We are convinced that the stability of the relationship between the EU and Russia is being played out [in Belarus],” said Mr Macron. “We do not want to see what we saw in Ukraine [where Russia annexed Crimea and supported pro-Russian separatists in the east of the country.] We have been very clear with Mr Putin. There must be dialogue between the authorities, the opposition and civil society. We are willing to help. Mr Putin has agreed. Mr Lukashenko is reticent.”

“We want the political prisoners to be freed. We want citizens’ rights to be respected,” she said.

As the EU looks to Mr Putin to help resolve the Belarus crisis, he is the object of suspicion in the poisoning of Mr Navalny, a leading Russian dissident, who is in a coma in a Siberian hospital after he was apparently poisoned.

Mr Macron said he was “extremely worried and saddened” by Mr Navalny’s poisoning and offered “all necessary assistance to Alexei Navalny and his family, in terms of medical care, asylum and protection.”

Dr Merkel said she was “overwhelmed” by the news. “We must know exactly how this happened. The conditions of his poisoning must be transparent.”

France and Germany have adopted different methods regarding heightened tension in the eastern Mediterranean, where Turkey is prospecting for natural gas in the territorial waters of EU member states Greece and Cyprus.

France increased its naval presence in the region, while Germany is trying to mediate between Turkey and the others. Dr Merkel is conscious of the presence of more than three million Turks in Germany.

“If France and Germany put their strength together, they can surely achieve calm in the eastern Mediterranean, which would prevent unacceptable attacks on the sovereignty of member countries,” said Dr Merkel. “We think we must resolve this through discussion and negotiation and not through military tension.”

Mr Macron added that “we have a shared objective . . . the sovereignty of [EU] member states and the stability of the region.” French and German actions were “complementary” he said, since “diplomacy without military power does not exist, and military power without a diplomatic path is counterproductive and leads to escalation”.

France is also at odds with Turkey in Libya, where France discreetly supports Gen Khalifa Haftar, the military commander who dominates eastern Libya, and who is supported by Egypt and the United Arab Emirates.

Turkey supports the Tripoli-based government of Fayez al-Sarraj and is accused of transporting jihadists from Syria to Libya, and of breaking a UN arms embargo.

Mr Macron and Dr Merkel were unified regarding Libya and Mali, where the army staged a bloodless coup against president Ibrahim Boubacar Keita this week. Mr Macron emphasised the importance of respecting the will of the people in Belarus, Mali and Lebanon.

“We are living through a time of crises,” he said. “The Covid-19 crisis is first among them.”

“We want to avoid at all cost closing borders,” said Dr Merkel.

Co-ordination “must be based on science,” said Mr Macron, “prevention through social distancing, masks, testing, tracing and isolation”.

The French president said several European vaccines are in phase three of testing and could be produced within months.