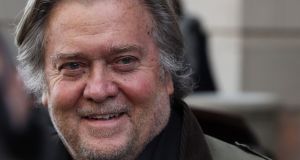 Steve Bannon: charged with conspiracy to commit wire fraud in relation to a fundraising campaign to support the building of the US-Mexico border wall. Photograph: Alex Wong/Getty Images

Former Trump adviser Steve Bannon has been arrested and charged over an online campaign to support the building of the US-Mexico border wall, becoming the latest former adviser to the US president to face criminal charges.

Mr Bannon and three others were charged over an online fundraising effort called “We Build the Wall”, which raised $25 million, according to prosecutors.

According to documents unsealed on Thursday morning in a federal court in Manhattan, the accused’s activities began in 2018.

The prosecutors allege that the accused “orchestrated a scheme to defraud hundreds of thousands of donors, including donors in the Southern District of New York, in connection with an online crowdfunding campaign ultimately known as ‘We Build The Wall’”.

Mr Bannon and his three associates had “defrauded hundreds of thousands of donors, capitalising on their interest in funding a border wall to raise millions of dollars, under the false pretence that all of that money would be spent on construction”, said acting US attorney in Manhattan Audrey Strauss.

Instead, Mr Bannon and his associates personally profited from the funds, prosecutors said.

“Not only did they lie to donors, they schemed to hide their misappropriation of funds by creating sham invoices and accounts to launder donations and cover up their crimes, showing no regard for the law or the truth,” said inspector-in-charge Philip R Bartlett.

Mr Bannon, the architect of Mr Trump’s campaign strategy for the 2016 presidential election and his “America First” ideology, is one of several figures involved with the president’s first campaign for election to have been arrested.