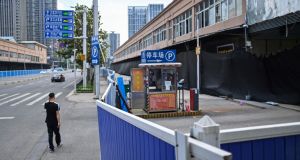 A man walking next to the still-closed Huanan seafood wholesale market in Wuhan, Hubei province, where the global coronavirus outbreak is believed to have begun. Photograph: Hector Retamal/AFP via Getty Images

Trump administration officials have tried taking a political sledgehammer to China over the coronavirus pandemic, asserting that the Chinese Communist Party covered up the initial outbreak and allowed the virus to spread around the globe.

But within the US government, intelligence officials have arrived at a more nuanced and complex finding of what Chinese officials did wrong in January. Officials in Beijing were kept in the dark for weeks about the potential devastation of the virus by local officials in central China, according to American officials familiar with a new internal report by US intelligence agencies.

The report concluded that officials in the city of Wuhan and in Hubei province, where the outbreak began late last year, tried to hide information from China’s central leadership. The finding is consistent with reporting by news organisations and with assessments by China experts of the country’s opaque governance system.

Local officials often withhold information from Beijing for fear of reprisal, current and former American officials say. The new assessment does not contradict the Trump administration’s criticism of China but adds perspective and context to actions – and inactions – that created the global crisis.

President Donald Trump said in a July 4th speech at the White House that “China’s secrecy, deceptions and cover-up” enabled the pandemic. Secretary of state Mike Pompeo insisted the administration was “telling the truth every day” about “the communist cover-up of that virus”.

Peter Navarro, a White House trade adviser, said on Saturday that the pandemic was “perpetrated on America” by the Chinese Communist Party.

The accusations dovetail with advice from Trump campaign strategists to look tough on China to try to shift the spotlight from the president’s failures on the pandemic and the US economy, and to paper over his constant praise of Xi Jinping, China’s authoritarian leader.

But the broad political messaging leaves an impression that Xi and other top officials knew of the dangers of the new coronavirus in the early days and went to great lengths to hide them.

The report, originally circulated in June, has classified and unclassified sections, and it represents the consensus of the CIA and other intelligence agencies. It still supports the overall notion that Communist Party officials hid important information from the world, US officials said.

The report says senior officials in Beijing, even as they were scrambling to pry data from officials in central China, played a role in obscuring the outbreak by withholding information from the World Health Organisation.

But the report adds to a body of evidence that shows how the malfeasance of local Chinese officials appeared to be a decisive factor in the spread of the virus within Wuhan and beyond.

An internal US government assessment of the differences in fault between Chinese leaders and local officials potentially has significant policy implications.

“It makes a huge difference if it was Wuhan or Beijing,” said Michael Pillsbury, a China scholar at the Hudson Institute who informally advises Trump.

If Xi was not the main person at fault, he said, then that meant that top Chinese officials had not engaged in total deceit on coronavirus, and American officials had some basis for still trying to engage in good-faith negotiations with Beijing on issues of mutual interest.

Although Pillsbury advocates competing with China, he also supports diplomacy and sticking to a trade agreement that Xi and Trump signed in January. Some of Trump’s other advisers, notably Navarro, have advocated an economic “decoupling” with China and denounced the trade deal.

Trump oscillates wildly on China. At times, he and other officials have asserted the idea of a cover-up by China to justify policy decisions such as cutting funding to the WHO. When the president announced that move in late May, he accused the WHO of helping China cover up the initial outbreak, though the organisation has denied that.

Separately, Pompeo, the administration’s most vocal China hawk, publicly pushed an unsubstantiated theory that the outbreak began with an accidental lab leak in Wuhan and asked US spy agencies to find evidence.

US officials commissioned the new intelligence report after a department of homeland security analysis said that Chinese central government officials hid the severity of the virus in early January to hoard medical gear.

Policymakers asked the entire intelligence community to examine it, and analysts came up with the new consensus report that aimed to refine and even correct the homeland security assessment.

Alexei Woltornist, a spokesman for the department of homeland security, said the agency “does not comment on any allegedly leaked documents”. The CIA declined to comment.

The Chinese government has said it acted quickly to limit the spread of the virus and to warn the world. This winter, central authorities ousted a few local party officials, indicating they were to blame. The new report does not diminish China’s culpability, current and former administration officials said.

Communist Party leaders oversee an authoritarian system that inhibits local officials from freely sharing information with national-level officials, they said, and this has had deadly consequences for the world.

It is a version of the so-called Chernobyl effect, where local officials avoid telling central authorities about a catastrophic event until it is far too late, American officials said.

Moreover, officials in Beijing have tried to spread disinformation about the origins of the virus. The CIA has said since at least February that Chinese central officials were not sharing everything they knew about the virus – including a more accurate case count – or doing all they could to help the world prepare for the pandemic.

Public reporting has revealed wrongdoing by Chinese officials at all levels but in different manners.

In early January, WHO officials began concluding that officials in Beijing were hiding information, The Associated Press reported in June, citing internal documents and recordings. Central officials delayed releasing the complete virus genome and ordered laboratories to destroy virus samples. At the same time, they were trying to get more information from reticent Wuhan officials.

Throughout early January, officials in Wuhan and in the provincial government tried to suppress information on the outbreak, in part because they feared derailing the local annual Communist Party meeting taking place at the time.

Around mid-January, officials in Beijing began realising the potential devastation. On January 13th, Thailand said it had discovered a case of the new coronavirus, alarming Chinese officials, who within a day began disseminating internal warnings of a pending catastrophe, according to documents obtained by the Associated Press.

A Taiwanese health official who visited a Wuhan hospital with other outsiders from January 13th to 15th said an official from Beijing told him of potential human-to-human transmission, even though local officials were playing down that possibility. Two days later, the Wuhan health commission announced that a family in the city had the virus and that “limited human-to-human transmission cannot be ruled out”.

A turning point came when a cluster of cases emerged in the southern city of Shenzhen, China, and when medical experts from Beijing visited sites in Wuhan on January 19th. Back in Beijing the next morning, they told senior officials that there was human-to-human transmission, and Xi said later that day that the outbreak “must be taken seriously”, according to a state television report that evening.

On January 23rd, Beijing ordered an extraordinary lockdown of Wuhan, a city of 11 million. The central government also stopped selling masks and respirators to other countries and began buying supplies from around the world. American officials ignored the warning signs, and the state department even flew 18 tons of donated medical gear to China in February.

Chinese state-run news organisations published an internal speech on February 15th indicating Xi had given instructions on the coronavirus in a meeting of the country’s top political body, the Politburo Standing Committee, on January 7th. But those reports might have been propaganda with exaggerations or falsehoods written to counter foreign news accounts that said Xi had been absent from the coronavirus relief effort. – New York Times