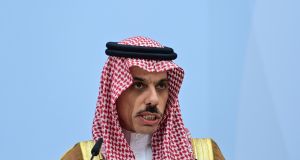 Saudi Arabia has said it would not establish relations with Israel until after it reaches a peace accord with the Palestinians.

The announcement amounts to a rebuff of US president Donald Trump, who said he expects the kingdom to follow the example of the Emirates and establish diplomatic and trade ties with Israel.

Under last week’s surprise Emirati-Israeli deal, promoted by Mr Trump, Israel suspended annexation of 30 per cent of the occupied Palestinian West Bank in exchange for normalisation of relations with the Gulf state.

Saudi foreign minister prince Faisal bin Farhan argued on Wednesday that “peace must be achieved with the Palestinians” on the basis of international agreements and said Riyadh remained committed to the 2002 Arab peace plan.

This plan, sponsored by late Saudi King Abdullah, called for full Arab normalisation in exchange for full Israeli withdrawal from Arab territory occupied in 1967: the Palestinian territories of East Jerusalem, the West Bank, and Gaza and the Syrian Golan.

Israel rejected this plan and has continued to build and expand settlements and in 1981 annexed the Golan Heights.

Prince Faisal reiterated Saudi characterisations of Israel’s “unilateral policies” of annexation and settlement construction in the West Bank as “illegitimate” under international law and “detrimental” to a two-state solution involving the emergence of a Palestinian state alongside Israel.

As the kingdom’s monarch assumes the title of “Guardian of the Two Holy Mosques” in Mecca and Medina, Saudi Arabia cannot afford to undermine the authority of this role by angering and alienating the millions of Arabs and Muslims who demand justice for the Palestinians.

Egypt, the first Arab country to reach a peace agreement with Israel, praised the Emirati decision to normalise, although Egyptians still oppose their country’s 1979 deal. Jordan, the second to sign an agreement, was circumspect.

Jordanian foreign minister Ayman Safadi said the Emirati decision “will move the region towards a just peace, [if Israel] dealt with it as an incentive to end occupation”.

The Saudi stance will make Arab and Muslim countries wary of following the Emiratis example since their populations could oppose it. A June poll cited by the Washington Institute for Near East Policy showed that 80 per cent of Emiratis reject contacts with Israel. Oman and Bahrain had been expected to follow the UAE example but may pause.

Saudi ally Pakistan has joined Turkey and Iran in rejecting peace with Israel until the Palestinians have their state.

Pakistani prime minister Imran Khan quoted his country’s founder, Muhammad Ali Jinnah, who said after Israel’s creation in 1948 that “we cannot ever accept Israel as long as Palestinians are not given their rights and there is no just settlement”.