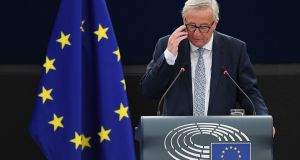 The EU will continue to stand by Ireland in the Brexit process in defence of the Belfast Agreement “in all its elements”, the president of the European Commission Jean Claude Juncker reiterated on Wednesday.

Later, MEPs at the European Parliament in Strasbourg voted by a substantial majority to discipline Hungary for breaches of the rule of law. The parliament, voting by the required two-thirds majority – 448 votes in favour, 197 against and 48 abstentions – called on the Council of Ministers to invoke Article 7 of the EU treaty against Hungary, which could see it deprived of voting rights in the Union.

Tuesday’s debate saw the country’s prime minister Viktor Orban berate MEPs for what he said was an attack on Hungary’s honour.In his annual state of the union address to the parliament, Mr Juncker insisted it was Brexit and not the EU which was creating the Border challenge in Ireland.

“The European Commission, this parliament and all other 26 member states will always show loyalty and solidarity with Ireland when it comes to the Irish border. This is why we want to find a creative solution that prevents a hard border in Northern Ireland. But we will equally be very outspoken should the British government walk away from its responsibilities under the Good Friday Agreement,” Mr Juncker said..

“It is not the European Union, it is Brexit that risks making the Border more visible in Northern Ireland. “

He said he respected, though regretted, the UK decision to leave but warned that the British government needed to understand that it could not be “in some privileged position” post-Brexit, and could not be in part of the single market.

DUP MEP Diane Dodds said the essential element of the Belfast Agreement was the principle of consent and she insisted there could be no internal border created on the Irish Sea.

In a wide-ranging speech that sought to set the tone for ambitious work by the commission for the final months of its term, ahead of next year’s European elections, Mr Juncker called for a wider international role for the euro currency, new work to solve the migration crisis collectively, a new partnership with Africa, an end to summer time, and majority voting in foreign policy on key issues like human rights.

“It is not right that our union silenced itself at the United Nations Human Rights Council when it came to condemning human rights abuses by China,”he said. “And this because not all member states could agree.”

He added in passing that he would also like to see an end to unanimity voting on some unspecified areas of taxation, a suggestion that will not go down well in Dublin. Such changes, previously touted by the commission president, require unanimity.

“This is why, before the end of the year, the commission will present initiatives to strengthen the international role of the euro. The euro must become the face and the instrument of a new, more sovereign Europe.” That would require the completion of economic and monetary union, he said.

On migration, Mr Juncker said the commission was proposing to further strengthen the European Border and Coast Guard with an additional 10,000 European border guards by 2020. It would  further develop the European Asylum Agency to help in processing asylum seekers and is proposing to accelerate the return of irregular migrants

“I would also like to remind member states again of the need to open legal pathways to the Union. I renew my call. We need skilled migrants. Commission proposals addressing this issue have been on the table for some time and must now be taken up.”

“Africa does not need charity,” the president said, “it needs true and fair partnerships. And Europe needs this partnership just as much. a new alliance for sustainable investment and jobs between Europe and Africa. This alliance – as we envision it – would help create up to 10 million jobs in Africa in the next 5 years alone.

“We want to create a framework that brings more private investment to Africa. We are not starting from scratch: our External Investment Plan, launched two years ago, will mobilise over €44 billion in both the public and private investment.”

He said that the commission is also proposing new rules to get terrorist content off the web within one hour and to extend the role of the newly established European Public Prosecutor’s Office to include the fight against terrorist offences.

Responding to the speech, the Socialist group leader, Ugo Bullman said it lacked a reference to a social Europe – “each and every child should be entitled to as of right to basic health and decent housing”. That was the way to unite Europe for the next generation, he said in comments echoed by the Green leader.