Defiant Orban says Hungary will not be blackmailed by MEPs 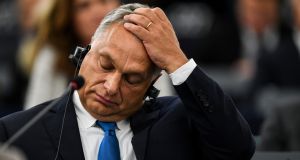 Hungarian leader Viktor Orban at the European Parliament in Strasbourg. The government in Budapest is accused of multiple breaches of the rule of law, corruption, discrimination against minorities, and its refusal to take in migrants. Photograph: EPA/Patrick Seeger

Hungary will not be blackmailed by MEPs, prime minister Viktor Orban told a heated European Parliament debate on Tuesday, adding that “if necessary we will stand up to you”.

“We have defended Hungary and Europe, and are going to be condemned because Hungary decided this is not going to be a country of migrants,” Mr Orban said.

MEPs will vote on Wednesday on a motion demanding that EU leaders discipline Budapest for multiple breaches of the rule of law, corruption and discrimination against minorities, and its refusal to take in migrants. The commission alleges that the government has also presided over repeated misappropriation of EU funds. A two-thirds majority will be required to pass the motion.

In a bruising debate Mr Orban was denounced by the Socialist leader in the parliament, Udo Bullman, as “the most corrupt leader in Europe”.

The Liberal leader, Guy Verhofstadt, quoted the late John McCain, who had described the Hungarian leader as “a neo-fascist in bed with Putin”.

Manfred Weber, the leader of the EPP – the grouping to which Mr Orban’s Fidesz party is affiliated – warned that his demonisation of Muslims was “doing the job of jihadists”. Responding to Mr Orban’s insistence that he was defending Christian values, Mr Weber said the EU had “invented human rights and not Christian rights”.

The EPP was on Tuesday night deciding which way it would vote.

MEPs were considering a report from their civil liberties, justice and home affairs committee from rapporteur Dutch MEP Judith Sargentini. She was succeeded by a series of other committee chairs and commission vice-president Franz Timmermans, all adding their support to the report.

It proposes to ask the Council of Ministers to invoke Article 7 of the Lisbon Treaty against Hungary to establish if it has violated fundamental EU values and norms – the first time that MEPs have done so against a member state, although the process has been initiated by the council against Poland.

Ultimately, EU leaders could vote to suspend the right to vote of an offending country.

Since 2010, Mr Orban has enacted laws that curb the independent media and consolidate his control of the judiciary. He has echoed anti-Semitic themes and demonised non-governmental organisations – notably the George Soros-backed Central European University – that he considers disloyal.

His stated goal is to create a “Christian democracy” that rejects “liberal methods and principles of organising a society”, and he has refused to accept EU “burden-sharing” by taking in refugees.

Mr Orban said the resolution was an attack not on the Hungarian government but on the nation and its people. It insulted their honour. Those who attacked Hungary, he said, were not those who had had to fight for their freedom as Hungary had, “but inherited it”.

He claimed the report contained 37 “serious factual misrepresentations” and was a breach of agreements made with his country. “We will protect borders and decide who to live with.”

Mr Verhofstadt said Hungary was not under attack. “You are not Hungary. Hungary is far more and far more eternal than you are.”

The leader of the Greens, Philipe Lambert, said Mr Orban’s comparison of the EU with the Soviet Union was outrageous. Hungary had freely chosen to join the union, and “the tanks of the EU were not to be found on the streets of any capital”.

The leader of the EDFF, Nigel Farage, said “thank God you are there”, standing up to what he called this “extreme bullying” and “show trial”. He praised Mr Orban for taking on Mr Soros. “Come and join the Brexit club,” he said.

Hungarian and Polish MEPs also joined in defence of Mr Orban and the country’s democratic credentials, with several speaking up for what they said was Hungary’s enlightened treatment of the Roma community.

Fine Gael’s Sean Kelly, a member of the EPP, said: “The ‘Stop Brussels’ campaign and general anti-EU rhetoric that was used in the election campaign earlier this year; the use of an anti-immigrant poster borrowed from UKip in the same election campaign; the accusations of limiting the freedom of the press in Hungary; the moves to introduce legislation that could close the Central European University in Budapest. These are all extremely concerning things to hear, and I know a number of EPP colleagues agree with me on this.

“These are not the actions we would typically associate with an EPP head of government, and it is disappointing that we are here today and having to discuss such issues with you. To me many of your actions are not in line with the principles and values of our group.”