Hurricane Florence will hit US ‘like a Mike Tyson punch’

Residents on the US east coast prepare for Hurricane Florence as it strengthens to a Category 4 storm and heads in their direction. Video: @TROOPERBOB_SCHP/Reuters 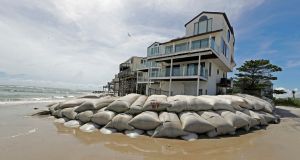 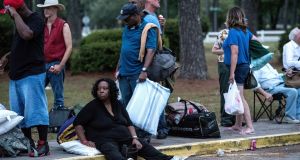 People evacuate ahead of the forecasted landfall of Hurricane Florence in Wilmington, North Carolina, US. Photograph: Caitlin Penna/EPA 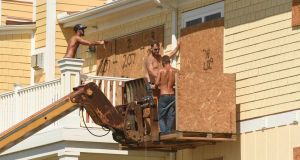 Crew work to board up homes in Oak Island, NC, in preparation for Hurricane Florence. Photograph: Ken Blevins/The Star-News via AP 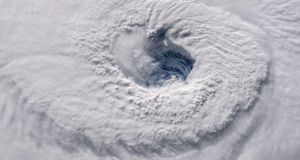 A camera outside the International Space Station captures a view of the eye of Hurricane Florence. Photograph: Nasa/ESA/Alexander Gerst/AFP/Getty Images

The east coast of the United States is bracing for a major hurricane as Hurricane Florence gathered pace in the Atlantic Ocean.

Satellite imagery on Wednesday showed the Category 3 hurricane with winds of 205km/h barreling towards the US.

It is expected to make landfall in North Carolina and South Carolina early on Friday. The National Weather Service (NWS) warned that the storm is likely to bring “life-threatening, catastrophic flash flooding and significant river flooding” when it hits.

Up to 1.7 million people have been ordered to evacuate across North Carolina, South Carolina and Virginia. Officials said on Wednesday that people in those areas were running out of time to do so.

More than 5.4 million people live in areas under hurricane warnings or watches on the US east coast, according to the NWS, and another 4 million were under a tropical storm watch.

States of emergency were declared in Washington, DC, and Maryland over flooding concerns. Georgia’s governor also declared a state of emergency for all 159 counties in the state.

Record levels of rainfall this summer have already left areas of the east coast vulnerable to further flooding.

In particular, concerns are growing that the hurricane may slow significantly and linger when it reaches the coast, potentially dumping tonnes of rain on the area, similar to Hurricane Harvey in Houston a year ago.

It is estimated that parts of North Carolina could get 1m of rain.

“North Carolina, my message is clear,” the state’s governor Roy Cooper said on Wednesday. “Disaster is at the doorstep and is coming in.” Authorities in the affected areas warned residents to leave.

Forecasts on Wednesday predicted that the hurricane may track farther south when it reaches the coast, leaving more of South Carolina vulnerable.

As residents fled the coast on Wednesday, all four lanes of some motorways leading west from the Myrtle Beach area of South Carolina were turned into one single lane in order to facilitate evacuation westwards.

More than 600 flights had been cancelled by Wednesday morning.

Jeff Byard, of the Federal Emergency Management Agency (Fema), urged people to flee before the hurricane hits, warning of a “Mike Tyson punch to the Carolina coast”.

On Wednesday Mr Trump doubled-down on claims earlier this week that the response to Hurricane Maria had been a “success”.

“We got A Pluses for our recent hurricane work in Texas and Florida (and did an unappreciated great job in Puerto Rico, even though an inaccessible island with very poor electricity and a totally incompetent Mayor of San Juan). We are ready for the big one that is coming!” Mr Trump tweeted on Wednesday morning.

A recent report commissioned by the Puerto Rican government showed that nearly 3,000 people died as a result of Hurricane Maria – much higher than the official death toll of 64 adopted by the US government.

The governor of Puerto Rico, which is a US territory, issued a statement following Mr Trump’s remarks.

“This was the worst natural disaster in our modern history. Our basic infrastructure was devastated, thousands of our people lost their lives and many other struggle,” Riccardo Rosselló said in a statement.

MSNBC reported that the Trump administration had diverted nearly $10 billion from Fema to the Immigration and Customs Enforcement agency, which leads border enforcement. But that has not affected the response to Florence, Mr Byard told a news conference.

He said there was “well over $20 billion” in Fema’s disaster relief fund.

The predicted flooding from Hurricane Florence could wreak environmental havoc by washing over industrial waste sites and farms.

“The time to prepare is almost over,” Mr Cooper warned.

“This storm is a monster. It’s big and it’s vicious. It is an extremely dangerous, life-threatening, historic hurricane.

“The waves and the wind this storm may bring is nothing like you’ve ever seen. Even if you’ve ridden out storms before, this one is different. Don’t bet your life on riding out a monster.”

The coastal surge from Florence could leave the eastern tip of North Carolina under more than 9ft of water in spots, projections showed.

Florence is so wide that a storm surge was being pushed about 483km ahead of its eye, and so wet that a swathe from South Carolina to Ohio and Pennsylvania could get deluged.