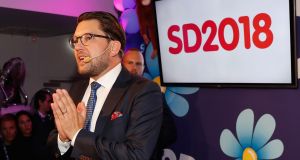 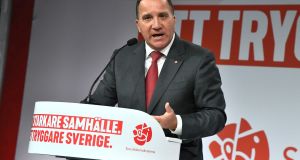 Prime minister and party leader of the Social Democrat party Stefan Lofven speaks at the election party at the Fargfabriken art hall in Stockholm on Sunday. Photograph: Claudio Bresciani/ EPA/ 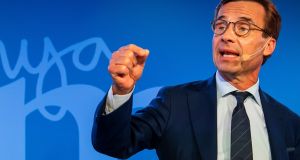 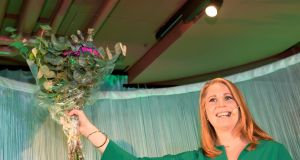 Swedish Social Democrat prime minister Stefan Löfven has urged all “decent” parties to unite after a record result in Sunday’s general election for the far-right.

The populist Sweden Democrats (SD) took 17.6 per cent to finish third, up almost five points and 14 seats on the last election.

It is forecast to take 63 seats in the new parliament, less than some opinion polls predicted but enough to prevent either mainstream left or right blocs forming a new government outright.

Mr Löfven’s once-dominant Social Democratic party fell to 28.4 per cent, its lowest level of support in a century, while the main centre-right Moderates also slid to 19.8 per cent.

With 7.3 million Swedes entitled to vote in this tight election, turnout was up slightly on 2014 to 84.4 per cent.

All eyes now turn to see if the ballots of non-resident Swedes, expected to be counted by Wednesday, influence the final result.

Anticipating weeks of difficult negotiations ahead, Mr Löfven, a welder by trade, vowed to “weld together” parties from previously opposing blocs to form a stable new government.

While there is no formal negotiating deadline, Swedish law requires a new budget to be brought by November 15th.

Party analysts on all sides accepted Sunday evening’s results had shattered the old Swedish political model, in particular the traditional dominance of social democracy and power shifting between left and right camps.

After leading a minority coalition last time around, and topping the polls this time around, Mr Löfven believes he has a mandate to seek a new government. His preferred option is a grand coalition with the Moderates.

But his party’s two-point slump under 30 per cent, saw Mr Löfven face resignation calls from the conservative-liberal Moderates.

Its leader Ulf Kristersson knocked back the idea of a grand coalition and vowed to form a government “that can collect our country and take responsibility in a complicated situation”.

But he refused to say whether, to do this, he would renege on his pre-election promise not to co-operate with the far-right Sweden Democrats (SD).

The far-right party with Nazi roots pushed an anti-immigrant and euroskeptic agenda in the election.

Despite openly racist and misogynist positions of many MPs, the party will have considerable influence in the upcoming negotiations and the new parliament.

A surge in its support over the summer weakened by election day but SD leader Jimmie Åkesson said it was “not hard to find the winner of this election.”

“We are going to have a tremendous influence in what is going to happen in Sweden in the near future and no one will take that from us,” said the 39 year-old politician.

On live television he offered to open talks with the centre-right camp, offering his party’s parliamentary support in exchange for tougher immigration policy.

While Moderates supporters are increasingly open to the idea of an unofficial co-operation with the SD, the smaller Liberal and Centre parties in its centre-right alliance oppose any such deal.

This was the first election since Sweden allowed 163,000 asylum seekers into this country of 10 million, proportionately the largest in Europe. Though asylum procedures have been tightened since, it has stoked fears over security and integration, and boosting existing concerns about the burden on the welfare state.

“We are witnessing an extremely close election and potential chaos when it comes to government formation,” Dr Andrej Kokkonen said, political scientist at the University of Göteborg.