New Yorkers set to vote as celebrity squares off against careerist

August 30th, 2018: New York governor Andrew Cuomo and challenger Cynthia Nixon argue over who is the stauncher opponent of US president Donald Trump in their only debate for the state's Democratic gubernatorial nomination. Video: Reuters 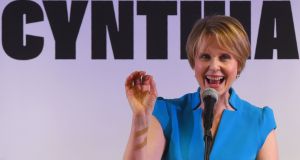 Actor Cynthia Nixon: in her campaign to be New York’s first woman governor, she has slumped behind incumbent Andrew Cuomo. Photograph: Timothy A Clary/AFP/Getty

Voters in New York go to the polls on Thursday in what promises to be one of the most closely watched primary races of the year.

Like many established Democrats, the governor of New York, Andrew Cuomo, is facing a steely challenge from the left. But Cuomo’s primary rival also has an in-built advantage – celebrity.

His challenger is actor Cynthia Nixon, better known as Miranda from Sex and the City. No TV series has been more synonymous with New York than the award-winning show which hit screens 20 years ago. It charted the lives of four young women making their way in Manhattan – but as its executive producer once put it, New York was really the fifth character in the show.

Nixon is hoping that her familiarity in her home town will be enough to knock Cuomo off the ticket in November.

Cuomo became governor of New York in 2011 and is seeking a third term. His father, Mario, also held the post for three consecutive terms.

On the campaign trail. he has highlighted his liberal credentials, listing his achievements since taking office, including legalising gay marriage, raising the minimum wage to $15 an hour, and strengthening gun control measures.

But in a left-leaning state like New York, he may not be progressive enough.

Nixon cast Cuomo as a 'centrist' and an 'insider', accusing him of 'selling New York to the highest bidder'

Critics believe he has pandered to Republicans who control the state senate in Albany, stopping more progressive policies from getting through. Allegations of corruption have also surrounded some of his allies.

Nixon, who has never before run for office, is running on a social democrat platform. She has pledged to introduce Medicare for all and to legalise marijuana. She has also highlighted Cuomo’s failures in tackling New York City’s chronically underfunded subway system. If elected, she would be New York’s first female, and openly gay, governor.

The primary battle has been bitter.

Nixon, who entered the race in March, cast Cuomo as a “centrist” and an “insider”, accusing him of “selling New York to the highest bidder”.

The pair held their first and only televised debate two weeks ago. Even before the debate, pre-match tensions erupted over air-conditioning. Nixon requested that the thermostat in the debate hall at Hofstra University be increased to 76 degrees – Cuomo famously prefers more chilly surroundings when he’s working. Her aides cited recent research that found that room temperatures are calibrated to male rather than female metabolisms.

The debate itself was fractious, with the two shouting over each other.

The campaign took a more insidious turn over the weekend, after the New York State Democratic Committee sent campaign fliers accusing Nixon of being “silent on the rise of anti-Semitism”.

Nixon, who is raising her two children as Jewish, denounced the campaign as “not only an attack on my family, but on all New Yorkers”.

Cuomo was forced to assert that he knew nothing about the campaign, though Nixon said she didn’t believe his assertions given his close ties with the committee.

Cuomo has now faced calls to personally condemn the attacks on Nixon. There is speculation that the smear tactic might backfire and help Nixon’s campaign.

Cuomo’s campaign has also been beset by controversy in recent days. Last Saturday, he held a grand opening of a new bridge over the Hudson river, but the opening was delayed by a few days after engineers cited a problem with the neighbouring bridge. Opponents accused Cuomo of pushing for the new bridge to be opened before the September 13th primary for political reasons.

Despite these last-minute slip-ups, polls predict that Cuomo will clinch the nomination when New Yorkers go to the polls on Thursday. A poll this week put him ahead with a 41-point lead. The New York Times has endorsed the governor, while he also has the backing of New York political heavyweights including Hillary Clinton and Kirsten Gillibrand.

Nixon, in contrast, has been backed by Alexandria Ocasio-Cortez, the left-wing candidate who unexpectedly beat incumbent Joe Crowley in the primary contest to be the Democratic nominee for New York’s 14th congressional district in November.

Whether Nixon succeeds in pulling off the latest in a series of primary victories by a new generation of left-wing Democratic challengers on Thursday will have ramifications not just for New York politics, but also for the party itself.