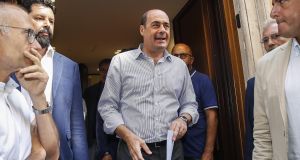 Nicola Zingaretti said a ‘turning-point’ government was needed marking a clear break from the policies of the previous government. Photograph: Fabio Frustaci/EPA

The leader of Italy’s centre-left Democratic party (PD) is under pressure to relent to demands for Giuseppe Conte to lead a PD-Five Star Movement coalition, as the deadline looms for the two parties to strike an agreement and avoid new elections.

The nomination of Mr Conte, the outgoing prime minister who last week ended an ill-fated coalition government between Five Star and the far-right League, is the main obstacle in the talks.

PD leader Nicola Zingaretti showed signs of opening up to the prospect of Mr Conte during a PD meeting in Rome on Sunday afternoon, said a source close to the discussions. But then later on Sunday, and again on Monday morning, he told reporters that any “turning point” government required a break from the past, including a change of team.

“I am working for a serious solution . . . we need to build a shared programme, because parallel programmes were a mistake that Italy is paying for . . . we can and we must move forward,” said Mr Zingaretti.

Five Star leader Luigi Di Maio has refused to back down on Mr Conte, saying last week that the law professor, who was plucked out of nowhere to lead its alliance with the League, was “a rare pearl that Italy can’t lose”.

Mr Zingaretti’s reluctance over Mr Conte partly stems from his preference to have elections rather than team up with a long-standing rival who has already been part of a failed government. The other issue is Matteo Renzi, the PD senator and ex-prime minister who spearheaded the idea, and who still wields considerable influence within the party.

“Renzi said ‘yes’ straight away to Conte . . . many are trying to convince Zingaretti, but he wants to demonstrate that he is the one in command,” added the source. “Either way, we need to decide today.”

President Sergio Mattarella is expecting to see serious signs of progress towards the creation of a new parliamentary majority before holding fresh consultations with Italy’s main parties on Tuesday and Wednesday. If a viable deal is struck between the PD and Five Star by Tuesday, Mr Mattarella could give them more time to formalise a plan. But if the talks implode, he will probably install a caretaker government until new elections.

PD supporters are also pressing Mr Zingaretti to accept Mr Conte. “I think it’s absurd to fight over Conte, he is a decent person who has shown great courage . . . we have a great opportunity,” wrote one on Zingaretti’s Facebook page. “Why veto Conte?” asked another. “This agreement should have been done over a year ago.”

A Twitter campaign to reinstate Mr Conte was also launched after his blistering attack in the Senate last week against Matteo Salvini, who dramatically withdrew his League party from the alliance with Five Star earlier this month as he sought to exploit his high popularity to force snap elections and become the next prime minister.

Mr Salvini’s moves have cost the party support: the League has slipped to 33.7 per cent from 38.9 per cent in late July, according to a poll published on Sunday. He also had not banked on the possible Five Star-PD tie-up, or that Mr Conte could emerge as his main rival. Mr Conte eclipses both Mr Salvini and Mr Luigi Di Maio in the popularity stakes, commanding 61 per cent, according to a survey on Saturday.

Mr Salvini has made peace overtures to Five Star to restore the government. Italian media reported that Mr Salvini and Mr Di Maio were due to meet on Monday, although spokespeople did not respond to a request for confirmation. The chances of them reviving the partnership are remote but cannot be completely ruled out. – Guardian