Europe criticised for not pressing Malta over journalist’s killing 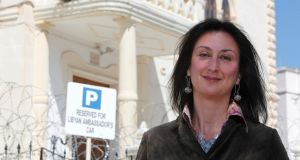 Daphne Caruana Galizia, who was investigating high-level corruption in Malta when she was murdered. Photograph: Darrin Zammit Lupi/Reuters

EU countries have not done enough to press Malta into holding an independent investigation into the 2017 killing of Daphne Caruana Galizia, who was investigating high-level corruption on the island state, the journalist’s family has claimed.

Investigative journalist Caruana Galizia was killed close to her home in Malta when a bomb exploded in the car she was driving. At the time of her death Caruana Galizia was investigating allegations of serious corruption by politicians and senior officials in the Maltese government, including kickbacks and money laundering.

Malta has since been criticised by human rights organisations for the length of time it has taken to bring Caruana Galizia’s suspected killers to trial. The European Parliament has also deplored “serious shortcomings” in the rule of law in Malta.

Last month, three men were formally charged over the killing, 19 months after they were arrested, with a trial date yet to be set.

“Human rights bodies, like the Council of Europe, and its agencies that focus on money laundering, and the rule of law, are really doing their best,” said Matthew Caruana Galizia, son of the murdered journalist.

“But what is disappointing is the response of individual governments within Europe, especially the UK government. They [the UK] refused to support the call for a public inquiry, even though in the UK public inquiries are set up as a matter of course for things that are much less serious than the murder of a journalist.”

The family was particularly keen to approach the UK because of its close ties and history with Malta.

In June the Council of Europe, the 47-country human rights organisation, set Malta a three-month deadline to launch an independent inquiry into Caruana Galizia’s death. The Maltese government has indicated its intention to meet the deadline, but has yet to set out details of an inquiry.

The Caruana Galizia family has the backing of Reporters Without Borders, the international press freedom organisation, which said it had experienced “significant difficulty” trying to raise the journalist’s case with the British foreign office.

In response, the foreign office said it had “regularly” raised Caruana Galizia’s case with the Maltese government. But it referred to a statement made by Alan Duncan, the former minister for Europe, who said in March this year: “The decision to establish a public inquiry is, nevertheless, a matter for the Maltese government.”

Reporters Without Borders said: “We again urge the Foreign & Commonwealth Office to support the call for a public inquiry into Caruana Galizia’s assassination, a measure which has now been given a three-month window for implementation by the Parliamentary Assembly of the Council of Europe.”

In a statement, the Maltese government said: “There is an ongoing engagement with the Council of Europe to ensure that such inquiry does not, in any way, prejudice the current criminal proceedings against three persons accused with the same murder.”

Mr Caruana Galizia said he did not believe there would be justice for his mother without an independent public inquiry. “There is a definite lack of political will in Malta to go beyond the low-level organised crime aspects of my mother’s murder,” said Mr Caruana Galizia, speaking in Valletta, the Maltese capital.

“The police are seeing this as an opportunity to finally prosecute the low level thugs . . . there is no will to go beyond the people who are criminally culpable for the murder,” he said.

He said a public inquiry was the only judicial process that could uncover responsibility for his mother’s killing that might arise out of negligence, either wilful or unwilful. “Even if people at the highest level of government in Malta did not directly commission the murder and did not mastermind it, at the very least they expressed a wish for someone to do something to stop my mother, and this wish would have been carried out by their underlings,” he said.

“Access to information is a big problem in Malta,” he said.

“Press freedom and political expression here is worse than it’s ever been in my generation,” he said. “The government will find ways of making your life difficult.” – Copyright The Financial Times Limited 2019