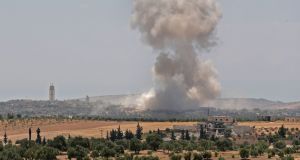 Smoke billows above buildings during a reported air strike by pro-regime forces on the town of Hish in Syria’s Idlib province on August 19th, 2019. Photograph: Omar Haj Kadour/AFP

Air strikes on Monday halted a Turkish armoured convoy by targeting its route as it entered Idlib province in northwest Syria.

The Turkish defence ministry condemned the attack on what it said was a supply column bound for ceasefire monitoring positions near the town of Khan Sheikhoun in Idlib, and that three civilians were killed.

Russia and the Syrian government said the convoy, consisting of dozens of vehicles, was en route to aid jihadis and Turkish-supported rebels besieged in Khan Sheikoun by the Syrian army.

The strikes, whether carried out by Russian or Syrian aircraft, during the ongoing battle for Khan Sheikhoun, demonstrated that Moscow, which dominates Syria’s skies, has lost patience with Turkey’s support for Idlib’s jihadis and rebels.

Syrian state media called Turkey’s intervention an “act of aggression” and quoted a foreign ministry source who said the convoy and the munitions it carried would not impact the “determination of the Syrian Arab Army to keep hunting the remnants of terrorists” in Khan Sheikhoun and other areas.

The Syrian army, with Russian air cover, advanced into the outskirts of Khan Sheikhoun late on Sunday after fierce fighting and surrounded insurgents holed up in a pocket of territory in neighbouring Hama province. Col Mustafa Bakour of the encircled Jaish al-Izza (Army of Glory) faction confirmed reinforcements from Turkish-surrogate rebel forces had deployed on the front lines.

Captured by rebels in 2014, Khan Sheikhoun is situated on the main Damascus-Aleppo highway in southern Idlib, a few kilometres from the Hama provincial border. Traffic between Damascus, the capital, and Aleppo, the former commercial hub, has been diverted to a narrow, secondary road which lies along the edge of Idlib, the last Syrian province held by jihadis. This road is dangerous due to its vulnerability to attack by anti-government fighters.

The Syrian army, backed by Russian airpower, launched a phased offensive against Idlib in late April this year after al-Qaeda-affiliate Hay’at Tahrir al Sham, which rules Idlib, rejected the terms of the deconfliction accord reached by Russia and Turkey 11 months ago and continued to attack government forces.

Instead, according to the opposition Britain-based Syrian Observatory for Human Rights, 1,400 jihadis and rebels and 1,200 pro-government fighters have been killed and 860 civilians have died, while the UN estimates 400,000 of the three million civilians living in Idlib have been newly displaced.

Khan Sheikhoun became notorious when, on April 4th, 2017, the opposition Idlib health directorate reported the town had sustained a chemical weapons attack, killing 89 people and injuring more than 500. The government said the attack was staged to provoke external intervention.

On April 7th, the Trump administration launched cruise missiles at an airbase near Homs which the US claimed was the launch pad of the strike on Khan Sheikhoun.