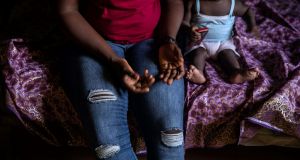 Trafficking survivors interviewed by Human Rights Watch said they were detained and refused contact with family when they returned to Nigeria. Photograph: Fati Abubakar /AFP/Getty Images

Juliet left Nigeria for Libya after being promised a job as a “sales girl” in Europe. She was the eldest of four children, raised by a single mother. There was never enough money, and Juliet had to drop out of school to work so they could eat.

She was introduced to a woman who promised to help her. The woman said going to Europe would enable Juliet to support the rest of her family, and further her own education.

“I agreed because I had no hope,” Juliet told The Irish Times by phone.

She spent days on the back of a truck, driving through the desert. Once in Libya, Juliet says she was forced to work as a housemaid for months, to pay smugglers.

Juliet tried to cross the Mediterranean Sea twice. The first time the boat capsized. The second time she was at sea for two days, before being returned to a Libyan detention centre.

If Juliet had made it across, she would likely have been in more danger.

In 2017, the International Organisation for Migration estimated that about 80 per cent of Nigerian women and girls arriving in Italy this way could be sex trafficking victims.

A new report by advocacy organisation Human Rights Watch details not only the suffering these women go through on the journey to Europe and once there, but also what happens to them when they return to Nigeria.

The 90-page report, titled “You Pray for Death: Trafficking of Women and Girls in Nigeria”, was based on interviews with 76 women and girls in Nigeria, as well as a range of other aid workers and government officials.

It says Nigerian women and girls are often tricked with offers of good jobs. Once they get to Libya or Italy they are told they have debts to repay, and the only way to do it is by working as a prostitute.

Some are even forced to go through “juju” rituals and believe they will be cursed if they stop obeying the trafficker controlling them.

Victims interviewed by Human Rights Watch said they had been forced to undergo abortions, without proper medication, after being impregnated by men they were made to sleep with for money.

When they return to Nigeria, traumatised women are being detained in shelters by authorities, with some telling Human Rights Watch they were banned from contacting their families or seeing visitors. They also said there is a lack of medical and psychological care, food and hygiene products.

“Women and girls trafficked in and outside Nigeria have suffered unspeakable abuses at the hands of traffickers, but have received inadequate medical, counselling, and financial support to reintegrate into society,” said Agnes Odhiambo, senior women’s rights researcher at Human Rights Watch. “We were shocked to find traumatised survivors locked behind gates, unable to communicate with their families, for months on end, in government-run facilities.”

Despite losing trust in the woman who lured her to Libya, Juliet says she couldn’t possibly go back to Nigeria now. “I can’t go home empty handed . . . I really need help.”