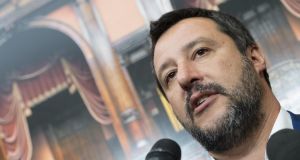 Matteo Salvini, Italy’s deputy prime minister and leader of its far-right League party, will host a gathering of European far-right parties in Milan next week aimed at building an alliance before elections in May.

Mr Salvini is attempting to position himself as the informal leader of Eurosceptic, populist forces in Europe, but it remains unclear whether any kind of formal coalition will work, given policy differences between parties and the tangled web of alliances already at play inside the European parliament.

Europe’s rightwing populists are in power in Italy, Hungary, Austria and Poland and are riding high in several countries including France and the Netherlands, and, according to polls, will make significant advances in May’s elections. However, they are not predicted to form a majority and most analysts believe they will struggle to present a united front.

Italian media reported that far-right parties from as many as 20 countries were invited to the event, due to be held on Monday at a luxury hotel in Milan. A spokesman for the League declined to give any details about who might attend, saying only that “further details will be provided within the next days”.

Mr Salvini said last week that partners in other EU countries were now “calling me” to initiate co-operation. “The difference between us and others is that they have to go abroad to seek alliances ... but the League invites European movements to Italy, our country has become central, thanks to this government,” he said, after announcing next week’s event.

Mr Salvini has been Italy’s deputy prime minister since last summer and his rightwing coalition continues to prosper, winning elections in the southern region of Basilicata last week, ending 24 years of leftwing rule. “Goodbye to the left, and now to change Europe,” he tweeted after the victory.

The League’s manifesto for the European elections said it will “underline and reaffirm common Christian roots, defend national identity and the supremacy of the Italian constitution over European laws and directives”. It also strongly opposes immigration, increasing European integration and austerity policies.

Mr Salvini has made a number of attempts to take his message beyond the borders of Italy. He travelled to Warsaw in January, where he held meetings with Jaroslaw Kaczynski, the head of Law and Justice, and others in the rightwing ruling party. He spoke of the two countries launching a “European spring” that could end the “Germany-France axis” of domination on the continent.

However, these talks have yet to grow into formal co-operation. Policy difficulties on issues such as Russia are one reason an alliance could prove tricky. Mr Salvini has praised president Vladimir Putin, while the Polish ruling party is hawkish on Russia. “I find it very difficult to imagine these two parties sitting down at the same table as part of the same grouping in Brussels, ” said Agata Gostynska-Jakubowska of the Centre for European Reform.

French far-right leader Marine Le Pen has previously backed the idea of expanding the putative alliance between her National Rally and Mr Salvini’s League into a “grand coalition” of nationalist forces capable of wielding real clout in the European parliament. The French far-right party’s election posters feature Ms Le Pen and Mr Salvini side by side, with the slogan: “Our ideas are coming to power.”

Ms Le Pen is not planning on attending the Milan gathering, a spokesman for her National Rally said, but declined to elaborate further or say whether the party would be otherwise represented.

Another possibility is that of a formal alliance between Mr Salvini and Hungary’s far-right prime minister, Viktor Orban, who has referred to Mr Salvini as a “hero in my eyes” and welcomed the Italian’s visit to Warsaw earlier this year.

Mr Orban’s Fidesz party is still a member of the centre-right European People’s party (EPP) grouping in Brussels, despite a recent suspension from the bloc due to its anti-Brussels rhetoric and concerns over rule of law. Party insiders believe it unlikely that Orban will travel to Milan next week, conceding it would essentially mean a full break with the EPP. So far, Mr Orban has appeared keen to put off that decision, but has floated the possibility of an alliance with Salvini after the elections.

“After the European elections, in Fidesz we’ll decide what is best for Hungary: whether we should continue within the People’s party or whether our place is instead in some kind of new party alliance,” Mr Orban said last month.

He said Italy was the only big European country that has a government that is also dedicated to stopping migration. “Perhaps this explains the hopes we attach to the Italians,” he said.

European far-right leaders have held several meetings in recent years, including in 2018 in Nice where Ms Le Pen hosted a gathering that included Geert Wilders of the Dutch party for Freedom, of Austria’s Freedom Party and the Czech nationalist Tomio Okamura.

There was no immediate confirmation from their parties that either Wilders or his new far-right rival in the Netherlands, Thierry Baudet of the Forum for Democracy, would be attending the meeting in Milan. A spokesman for Germany’s far-right AfD party said it would be sending a representative to the event but declined to elaborate further. – Guardian