Brexit: Buying ham sandwich in Derry to eat in Donegal could be illegal from Saturday week 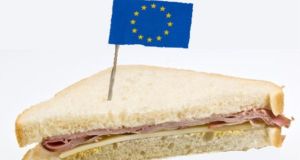 Commission officials briefing on no-deal planning for food and health product imports confirmed prohibitions on material crossing the Irish Border, including ham sandwiches, whether or not there are border posts and controls on it. Photograph: Getty Images

Buying a ham sandwich in Derry and walking across the Border to eat it in Donegal could be illegal from Saturday week, an act of smuggling. As could that family weekly supermarket shopping trip to Newry from Dundalk.

If the UK leaves the EU on April 13th with no-deal, a scenario now described by the commission as “highly likely”, the imposition of health controls between the EU and this “third country” will bring with it a ban on the export to the EU of all animal-based products, including meats and dairy products. From ham to pork pies, and Cheddar to Wensleydale. Butter too.

Unless, that is, an exporter is registered on an EU authorised exporter list as conforming to EU production and health standards.

Commission officials briefing journalists on no-deal planning for food and health product imports confirmed on Thursday that would mean prohibitions on all such material crossing the Irish Border, whether or not there are border posts and controls on it.

In practice that may mean there will be no-one to take the ham sandwich off you on the Donegal side of the Border.

Surely that can’t be right, one official was asked by The Irish Times. “Don’t go there,” he was quickly told by his boss. This is sensitive political ground.

The Commission is engaged in “intensive and urgent” discussions with Dublin about how the Border will be policed in a no-deal scenario without any border infrastructure. That means, if at all possible, away from the border.

But when it comes to the EU’s very strict sanitary and phytosanitary (animal and plant) health checks there is a legal requirement on the receiving member state to conduct such tests as close as possible to the point of entry to the single market.

How Dublin and Brussels can reconcile such conflicting aspirations is not yet clear. But that would be resolved by next week, journalists were assured.

A senior EU official reiterated that the provision in the proposed backstop for close continued regulatory alignment to the EU in the North and the treatment of the island as a single sanitary and phytosanitary (SPS) region was the best and “only” solution to the challenge by making the need for internal SPS border checks unnecessary.

The UK’s refusal to accept the withdrawal agreement, however, made unilateral measures by the Republic necessary, albeit inevitably much more difficult and complex, she said.

EU and Irish officials have said that should the UK leave without a deal they see the opening of bilateral discussions with it on implementation of the backstop as a top priority.