Romania rejects EU and US criticism over judicial reforms 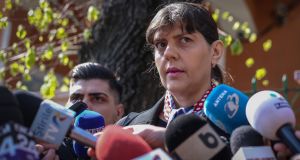 Romania’s government has rejected sharp European and US criticism of its sweeping judicial reforms and its bid to stop the country’s most high-profile prosecutor from leading a powerful new EU anti-corruption agency.

During two years in power, the ruling Social Democrats (PSD) have pushed through changes to legislation and personnel in the criminal justice system that critics say weaken its ability to fight graft and resist political meddling.

The party is now preparing emergency decrees to shorten the statute of limitations on certain offences and to allow new appeals against many graft convictions handed down since 2014, which would benefit convicted politicians like PSD leader Liviu Dragnea.

Ireland joined nine other European nations and the US and Canada on Wednesday in urging the government “to avoid changes that would weaken the rule of law and Romania’s ability to fight crime or corruption”.

“The emergency ordinances apparently under discussion have the potential to impact on the independence of Romania’s judiciary . . . and undermine trust in the justice system and in Romania’s government,” they said in a joint statement issued by the Canadian embassy in Bucharest.

“Regrettably, official requests for a dialogue on these matters have remained unanswered since January,” they added, while remarking that Romania’s current EU presidency gives it “a special position of responsibility”.

In Brussels, European Commission vice-president Frans Timmermans said the EU would “react immediately” if Bucharest pursued reforms that threatened the rule of law.

“I warn the Romanian government not to take any action that affects the judiciary and creates impunity for high-level officials who have been convicted of corruption,” he said.

“If these problems aren’t solved, then the Commission will have to do something concrete with the means at its disposal.”

That was widely interpreted as a suggestion that the EU could impose on Romania the kind of infringement proceedings that are now under way against Poland and Hungary over fears for their rule of law and democracy.

The criticism was brushed off by Romanian prime minister Viorica Dancila, a loyal supporter of Mr Dragnea, whose convictions for vote rigging and abuse of office currently bar him from holding office.

She said Mr Timmermans’s comments “did not correspond to reality” and that the 12 countries’ joint statement was inappropriate.

“I will not allow the ambassadors of other states to set the agenda of the prime minister,” Ms Dancila said.

Last year, the government also forced through the dismissal of Laura Codruta Kovesi, who as Romania’s top anti-graft prosecutor oversaw the conviction of powerful politicians and businessmen, including members and backers of the PSD.

The European Parliament wants her to lead the new European public prosecutor’s office, but Bucharest is lobbying against her and a Romanian investigative body led by government appointees has filed criminal charges against her.

“I wish to express the deep concern of the European Parliament over the situation and clearly reaffirm that Ms Kovesi remains our candidate, enjoying our trust and support,” said the assembly’s president, Antonio Tajani.

Also on Wednesday, Romania’s supreme court quashed a ban on Ms Codruta Kovesi travelling abroad that was imposed as part of the investigation against her.