Merkel says Border is question of war and peace

On eve of chancellor’s visit to Dublin, German officials underline support for Ireland 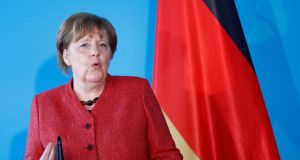 Chancellor Angela Merkel has described the Irish Border question as a matter of war and peace on which she will engage “intensively” in Dublin on Thursday.

German officials describe the chancellor’s visit to Dublin as a show of solidarity with the Government amid ongoing Brexit chaos in London.

Ahead of her visit, the German leader insisted the onus remains on British prime minister Theresa May to present a solution to the Brexit impasse – efforts the chancellor hopes end in success. For her part, Dr Merkel has promised to engage “to the last hour” for a constructive agreement with London, because it was in Germany’s interest.

Until clarity emerges from London, however, senior Berlin officials say there is little to be gained from them offering suggestions from the sidelines.

Instead German officials are engaging with their Irish counterparts on the Border question as part of a wider debate on the future of the EU27 and the integrity of the single market.

On Tuesday in Paris, French president Emmanuel Macron expressed wariness of granting further extensions to the UK departure date, particularly without clear reasons and goals. The chancellor agrees that an extension is not a given, and London must explain why it is needed.

But, around Berlin, officials are wary that impatience now could reflect badly later on the EU and Germany when the history of Brexit is written.

German politicians of all hues cite nearly three years of EU solidarity with Dublin as a rare highlight in an otherwise dark Brexit narrative.

And ahead of Dr Merkel’s Dublin visit, taking up a long-standing invitation from the Government, one of her political allies in Berlin has insisted Germany will “not allow Ireland be left out in the rain”.

He described the backstop as a “red line for the EU . . . that is not up for discussion” but “an emergency solution, no more and no less”.

But no withdrawal agreement meant no backstop, he added, meaning the “hardest EU outer border” could soon run through the island of Ireland.

“There would be no transition phase by which in the UK, though already a third country, EU law would continue to apply,” he said.

Dr Pfeiffer noted that talks were already under way between Dublin and the European Commission and that Brussels had “already signalled a certain flexibility on customs regulations”.

German solidarity with Ireland would extend beyond Brexit, he said, calling for closer ties between the two countries’ IT and start-up sectors.

As Germany gears up to mark November’s 30th anniversary of the fall of the Berlin Wall, Dr Pfeiffer said his country knew how walls create separation, not peace.

“We Germans above all know the consequences of a hard border.”