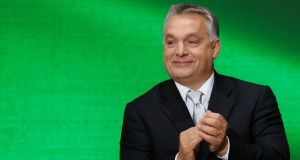 Mr Orban accuses Budapest-born Mr Soros of buying influence in the European Union and pressing it to admit millions of mostly Muslim immigrants, whom the Hungarian leader describes as a deadly danger to the bloc’s security and identity.

“The Soros network has an extensive sphere of influence within the European Parliament and other EU bodies, and its aim is to build a Europe of mixed population and to condemn the Hungarian government for opposing their view on migration,” Mr Orban said on Friday.

Hungary’s security services would help reveal how Soros-funded groups operated and who was working with them, including Hungarian citizens, he added.

Despite taking a scholarship from Mr Soros to study in England in 1989, Mr Orban now vows to create an “illiberal democracy” that staunchly opposes immigration, a model that is anathema to the billionaire’s vision of an open society.

Mr Orban built fences on Hungary’s southern borders to block refugees and migrants in 2015, and fiercely rejects EU efforts to relocate refugees around the bloc and criticism of his alleged erosion of Hungarian democracy and rule of law.

“This is another attempt to intimidate the media and silence critical voices,” Mr Soros’ Open Society Foundations said in a statement about Mr Orban’s latest comments.

“Hungarians deserve to have access to information, different points of view, and a free and open debate. Despite the false allegations, George Soros and the Open Society Foundations remain committed to helping the people of Hungary. ”

In developments that remind Mr Orban’s opponents of autocracies like Russia and Turkey, his allies have come to dominate business and media in Hungary since he returned to power in 2010 and loyalists now run formerly independent institutions.

He has also tightened state control over foreign-financed NGOs and educational institutions like the Soros-funded Central European University in Budapest, prompting the EU to launch legal action in both cases.

Marta Pardavi, co-chair of the Hungarian Helsinki Committee advocacy group, said Mr Orban’s call for the security services to investigate Soros-funded NGOs like hers was “quite surprising and shocking to hear in 2017 in an EU member state.”

“On the other hand, from the perspective of how authoritarian regimes typically go on a path of cracking down on dissent and democratic values, this is not really surprising,” she told The Irish Times.

“This way of portraying NGOs, human rights groups and individual activists – basically anyone not aligned with the [ruling] Fidesz party line – as paid agents and national security risks says a great deal about the seriousness of Hungary’s undemocratic turn.”

Fidesz is expected to dominate parliamentary elections due next spring, thanks largely to Hungary’s growing economy, widespread support for Mr Orban’s tough anti-immigration steps, glowing coverage of his government in most Hungarian media outlets and chronic disarray among centre-left parties.

Fears rise of Covid-19 outbreak among displaced in Idlib 18:42
France faces ‘economic and social crisis’ due to Covid-19 18:29
US educators opt for online learning as Covid-19 deaths rise 17:37
Worm found in tonsil of Japanese woman who had a sore throat 17:27
Covid-19: Queensland quarantine breakers could face six-month sentence 17:13