‘Significance of this watch cannot be overstated’: Actor’s Rolex goes under hammer 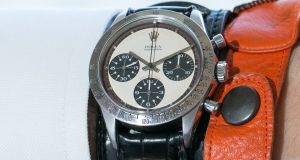 The watch was given to Newman by his wife, Joanne Woodward, in 1968. Photograph: Handout/AFP/Getty Images

A rare Rolex watch that was owned by the late movie star Paul Newman has sold for almost $17.8m (€15.3m), making it the most expensive watch ever auctioned.

Newman, who won an Oscar for his performance in the 1986 film The Colour of Money, wore the watch every day for 15 years.

The Rolex Cosmograph Daytona, made of stainless steel and on sale between 1963 and 1970, became known as the “Paul Newman watch”.

It had been expected to sell for £1m but there was far more interest than expected. More than 700 people crammed into the auction room, while others joined by phone from 43 countries.

The watch had been given to Newman by his wife, Joanne Woodward, in 1968. She bought it from a Tiffany & Co store in New York and had it engraved with the message “Drive carefully”, in light of her husband’s fledgling motor racing career.

In 1984 Newman gave the watch to his daughter’s then boyfriend, James Cox, who did not own a watch, saying it “keeps good time”.

After Mr Cox and Newman’s daughter Nell split up they remained on good terms, and they jointly put the watch up for auction. A portion of the proceeds will go to the Nell Newman Foundation and the Newman’s Own Foundation.

Paul Boutros, the head of watches at Phillips auctioneers in New York, said it had been a tremendous honour to handle the sale. “The significance of this watch cannot be overstated,” he said.