President stops short of national emergency, which would have freed up federal disaster relief fund 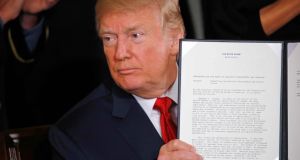 US president Donald Trump declared the opioid crisis a public health emergency on Thursday, though stopped short of designating the crisis a national emergency, a declaration that would have freed up more federal funds.

At a press conference in the White House, Mr Trump announced new measures to combat the crisis that has seen millions of Americans become addicted to powerful painkillers, most of which are available on prescription.

According to the US Centers for Disease Control and Prevention, 33,000 people died of opioid overdoses in 2015, the highest on record. The problem is particularly acute in white, working-class communities and in states where Mr Trump attracted strong support in last year’s election.

The new measures will give states greater flexibility in using federal funds and will require federally-employed drug prescribers to undergo special training. It will also expand the practice of “telemedicine” which allows patients to access treatment without seeing a doctor. The public health emergency will last for 90 days, and can then be renewed.

But the president stopped short of declaring the crisis a national emergency – a designation that would have given states access to funding from the federal disaster relief fund – despite pledging to do so last week. Officials indicated that such a designation would not have offered a long-term solution to the crisis, but Democrats and anti-drug campaigners said the measures announced by the White House on Thursday were not enough.

Addressing a room of almost 200 people affected by opioid addiction and working in the field of addiction prevention, Mr Trump described how his own brother, Fred, had battled with addiction and had encouraged the future president not to drink.

“He had a very, very tough life because of alcohol,” he said. “I had somebody that guided me,” he said, emphasising the importance of teaching people “not to start”.

“The best way to prevent drug addiction and overdose is to prevent people from abusing drugs in the first place. If they don’t start, they won’t have a problem,” he said.

Noting that drug overdoses are now the leading cause of unintentional deaths in the United States, he said that an average of 175 people die every day because of opioid addiction. “The United States uses more opioid pills per person than any other country by far in the world. Opioid deaths have quadrupled since 1999.”

Mr Trump also vowed to stop the flow of illegal drugs into the United States, promising that his proposed wall on the southern border with Mexico would help combat the problem of illegal drug smuggling.

But even some of the legally-available drugs are sourced from outside the United States, particularly China, which produces much of the opioid fentanyl used by Americans.

The president indicated that he will raise the issue with Chinese president Xi Jinping as a “top priority” during his visit to Asia next month. “And he will do something about it,” he said.

First lady Melania Trump also addressed the crowd, describing how she has met with sufferers of addiction and their families in recent months. “This can happen to any of us. Drug addiction can take your friends, your family, your community. No state has been untouched.”

The White House declaration was announced hours after the founder of a popular opioid drug, Insys, was charged with fraud and racketeering. John Kapoor, who stepped down as chief executive of the company in January, and six other directors were charged with involvement in a scheme to bribe doctors to prescribe the fentanyl-based drug.

The case reflects a growing clampdown on the manufacturers of opioid drugs and prescribers, particularly at a state level, as lawmakers try to tackle the health crisis.