Two sailors and their dogs rescued after five months at sea 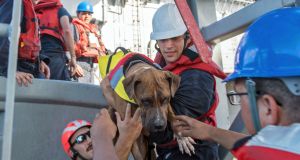 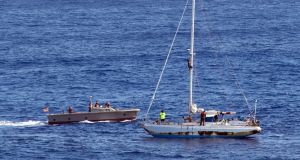 Sailors from the USS Ashland prepare to rescue two women and their dogs from a yacht in the Pacific Ocean. Photograph: Mass communication specialist 3rd class Jonathan Clay/US navy via AP

Two US sailors and their two dogs have been rescued by the US navy after more than five months lost at sea in the Pacific Ocean.

The planned voyage from Hawaii to Tahiti aboard a small yacht did not start well for the two women from Honolulu — one of their mobile phones washed overboard and sank on their first day at sea.

From there, things got worse. About a month into the trip, bad weather caused their engine to lose power, then their mast was damaged, and, as they drifted across thousands of kilometres of open ocean, the water purifier stopped working.

But the two sailors, accompanied by their faithful pets, were resourceful and prepared, with more than a year’s worth of food on board.

They sent out daily distress calls that no one heard, until they were rescued by the US navy on Wednesday about 1,450km southeast of Japan, thousands of kilometres off course.

The USS Ashland rescued the women after a Taiwanese fishing boat spotted their crippled yacht on Tuesday and alerted the US coast guard, the navy said in a statement.

The women, identified by the navy as Jennifer Appel and Tasha Fuiava, had believed they could still reach Tahiti using their sails even after losing their engine in late May.

“They saved our lives,” said Ms Appel in the navy release. “The pride and smiles we had when we saw [the US navy] on the horizon was pure relief.”

In a phone call with news media from the Ashland, she said they had sent a distress signal every day for 98 days with no response.

“It was very depressing and very hopeless, but it’s the only thing you can do, so you do what you can do,” she said.

A group of sharks attacked their boat one night, and a single shark returned a day later, she said.

“We actually thought it was lights out, and they were horrific,” Ms Appel said. “We were just incredibly lucky that our hull was strong enough to withstand the onslaught.”

Asked if they ever thought they might not survive, she said they would not be human if they did not. She credited the two dogs, which she called their companion animals, with keeping their spirits up.

Her mother said she never gave up hope that her daughter would be found.

Joyce Appel (75), who lives in Houston, said she got a call from her daughter early on Thursday, more than five months after they had last spoken.

A photo provided by the navy shows Ms Fuiava smiling as a navy sailor greets her dog, Zeus, aboard the USS Ashland.

The women received a medical assessment, food and beds aboard the navy ship, where they will remain until the next port of call.