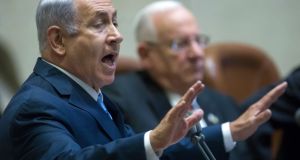 Mr Netanyahu, who is under investigation in two separate corruption affairs, has attacked the police and judiciary in recent weeks and accused the “left-wing media” of orchestrating a coup to topple the democratically elected government.

Coalition chair and Likud Knesset member David Bitan said he was not surprised by the accusations made at the opening of the Knesset parliament’s winter session on Monday evening by Mr Rivlin, a veteran Likud politician who became president in 2014.

“Rivlin has long since stopped being one of us. He’ll always be against us because Netanyahu refused to support and voted against his presidential bid. We represent the public and the people of Israel, ” he said.

Mr Rivlin, in his address to the Knesset plenum, appeared to adopt much of the left-wing opposition criticism of the actions of the Netanyahu government, even though the role of president is traditionally ceremonial with presidents generally avoiding contentious political issues.

“In this climate of delegitimisation, there is no more statesmanship. Democracy means that the strong decides,” he said. “Leadership in a democratic country is the art of creating agreements, not vanquishing opponents. A democratic society is based on building processes, not revolutions. In this revolution, the ruler is also the victim. ‘We’ll show them’ is the soundtrack of the revolution. The stateliness has gone from our country. After us the deluge.”

He also referred to the ongoing efforts to curb the powers of the supreme court, deemed by the right-wing coalition parties to be a bastion of the Israel’s leftist elites. “How can a threatened, conformist and toothless court be in the interest of the state of Israel? Of Israeli democracy?” he asked.

While members of the opposition had nothing but praise for the president’s Knesset speech, Likud culture minister Miri Regev accused Mr Rivlin of disrespecting the will of the people.

“President Rivlin gave the most unstatesman-like and undemocratic speech ever given by an Israeli president, and it’s worth remembering he was a politician for a long time and was voted president by other politicians. In his speech the president bit the hand that fed him,” she said.

One of the most controversial Bills being drawn up by the Likud would outlaw investigations against sitting prime ministers. Israel’s attorney general warned that the move would turn the position of prime minister into a “sanctuary city for criminals” and a number of centrist coalition Knesset members said they would vote against it.