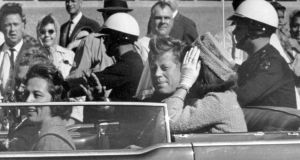 President John F Kennedy waves from his car in Dallas, moments before he is shot. Photograph: AP Photo/Jim Altgens

Fresh details surrounding the assassination of President John F Kennedy have emerged almost 54 years since his death, after US president Donald Trump sanctioned the release of thousands of classified documents relating to one of the most high-profile events in US history.

With the deadline expiring this week on a 1992 Act which prohibited the release of the documents for 25 years, Trump announced last weekend that he would make them public. But he was forced to hold back many of the most sensitive documents following last-minute pleas by members of the CIA, the FBI and other national security officials.

In a statement, Trump said that executive departments and agencies had proposed to him that certain information should continue to be redacted because of national security, law enforcement, and foreign affairs concerns.

“I have no choice, today, but to accept those redactions rather than allow potentially irreversible harm to our nation’s security,” he said, though officials insisted these documents will be reviewed during a 180-day period, after which they may be released.

Trump tweeted on Friday: “JFK Files are being carefully released. In the end there will be great transparency. It is my hope to get just about everything to public!”

Trump has himself weighed in to the controversy surrounding Kennedy’s death, alleging during the presidential campaign that the father of his campaign rival Ted Cruz was involved in the assassination. No reference to Cruz snr was made in the tranche of documents released by the National Archive late on Thursday.

The 300 documents which remain under wraps contain some of the most potentially sensitive information related to the killing of Kennedy in 1963, an assassination that led to several government enquiries and a wave of conspiracy theories about possible CIA involvement.

Among the most eagerly-anticipated files had been those relating to a six-day visit to Mexico by Lee Harvey Oswald, the man who was arrested for shooting Kennedy from the sixth floor of the Texas School Book Depository on November 22nd, 1963. Two days later he was shot dead by a local nightclub owner, Jack Ruby.

During the Mexico trip, which took place just six weeks before Kennedy’s assassination, Oswald met with Cuban and Soviet officials, and was being monitored by the CIA.

Many of the documents relating to the visit, however, were withheld from publication this week.

Nonetheless, the trove of approximately 2,800 documents contains some fascinating new details relating to the assassination.

A CIA memo reveals that the agency intercepted a phone call from Oswald to Valeriy Vladimirovich Kostikov, a senior official in the KGB in Moscow who handled “sabotage and assassinations” a month before the assassination. Oswald had previously tried to defect to the Soviet Union.

A document, which was released by the National Archives in July, but was only reported on after Thursday’s release, claims that a local newspaper in Britain received a tip-off about an impending event, 25 minutes before Kennedy’s assassination.

The memo from the deputy head of the FBI, James Angleton, to the FBI director J Edgar Hoover, said that the Cambridge News had received an anonymous call before the shooting warning of “something big”. The FBI had been told about the phone call by British intelligence service MI5, the memo states.

The memo, which cites information provided by a source who was in Russia at the time of Kennedy’s death, said that Soviet officials were fearful that “without leadership, some irresponsible general in the United States might launch a missile at the Soviet Union”.

The release of classified documents related to the Kennedy assassination is just the latest twist in a decades-long fascination with the death of the young president who was shot and killed while travelling through Dallas beside his wife in an open-top limousine.

Within months of the assassination, Johnson, his successor in the White House, established a commission of investigation. The Warren Commission reported in September 1964 and found “no evidence that either Lee Harvey Oswald or Jack Ruby was part of any conspiracy, domestic or foreign”. It concluded that the shots that killed Kennedy and injured Texas governor John Connally who was travelling in the front seat, were fired from a sixth-floor window of the southeast corner of the Texas school-book depository.

Further investigations followed, including a 1969 investigation by a panel of four doctors who confirmed the medical conclusions of the Warren Commission.

However, a 1979 investigation by the House Select Committee on Assassinations alleged there was a “high probability” that more than one gunman had fired at Kennedy.

The 1991 Oliver Stone film JFK revived an interest in the circumstances surrounding Kennedy’s death. In part, it led to the 1992 JFK Assassination Records Collection Act. It mandated that all documents related to the assassination of the president be housed in the National Archives, and that all documents should be publicly disclosed within 25 years: October 26th, 2017.