Brexit: parliament may vote on deal ‘after Britain leaves’ 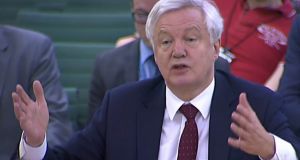 Britain’s Brexit secretary David Davis said on Wednesday that parliament may not get to vote on a final Brexit deal until after Britain leaves the EU. Photograph: AFP

Britain’s Brexit secretary, David Davis, has said parliament might not be able to vote on the final deal with the EU until the UK has officially exited the bloc in March 2019.

Asked by Labour MP Seema Malhotra when he envisaged parliament would be able to vote on the future relationship with the European Union once a deal had been concluded, Mr Davis said discussions could go on until the final minute on the final day of negotiations.

When Ms Malhotra asked if that vote might have to come after the UK formally exits under the article 50 process timeline of March 29th, 2019, he said: “Yes, it could be. It can’t come before we have the deal. We have said it is our intent and expectation that we will bring it to the British parliament before the European parliament.”

Earlier, Davis had told the Brexit select committee he believed the EU would finalise the deal only at the last possible moment. “It’s no secret that the way the union makes its decisions tends to me at the 59th minute of the 11th hour of the last day.

That’s precisely what I would expect to happen here. I am quite sure in my mind that we can do that,” he said.

“If there is a time limit on a negotiation, the union stops the clock, it assumes it is still at 11.59 and it carries on until the deal is concluded, sometimes for 24, 36, 48 hours. That’s what I imagine will happen here.

“It will be a lot of pressure, very high stress, very exciting for everybody watching. But that will be what happens.” He dismissed the claims of the EU’s chief negotiator, Michel Barnier, that Brexit trade talks would drag on for years, insisting an agreement could be signed within a “nanosecond” of leaving the bloc.

The Brexit secretary said the UK still believed the trade deal could be completed before the end of March 2019, despite Mr Barnier saying talks could extend throughout the transition period after leaving. Davis said he disagreed with Mr Barnier on this point but said individual EU leaders might take a different view, allowing for a trade deal to be done in the next 12 months before ratification by each country’s national and regional parliaments.

“His original plan for the timetable was effectively ‘Do the withdrawal agreement up to the end of March 2019 and then start the trade agreement in an infinite transition arrangement’, which would have put us in a very difficult negotiating position because we would want to solve quickly and they would want to solve slowly,” the Brexit secretary said.

He claimed some EU countries could see their economies hit by 3-4 per cent if no trade deal with the UK was agreed, which meant the European Council had a strong interest in getting a deal done swiftly.

Mr Davis also sought to allay business fears that the transitional period will not be agreed until the future relationship with the EU is settled, saying he hoped an outline would be agreed within months.

“I would be aiming to get certainly the outlines of it agreed, if we could, in the first quarter [OF 2018]... but it’s a negotiation,” he said.

Business groups have been lobbying for a transitional deal to be agreed by Christmas, but Theresa May has said the implementation phase can happen only when it is clear where the UK and EU are heading in terms of their future relationship.

Mr Davis said Mrs May was right but an outline of the transitional period could be agreed sooner.

“What we’re aiming for is the conclusion of negotiations on all fronts by the end of March 2019. In principle, what she said in the chamber is right ... But what we are intending to do is get the form of the implementation period agreed quickly, December thereafter, but we want to conclude the overall negotiation by the end of March 2019,” he said.

He said it was only possible to finally agree the implementation period when it was clear whether the UK and EU were heading towards a a full free trade agreement or a “bare-bones agreement” of WTO rules plus deals on security, airlines and other areas or another format.