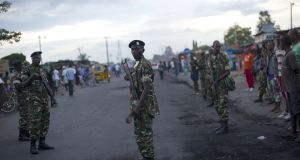 Army soldiers in the Cibitoke neighbourhood of Bujumbura: The Great Lakes country, which has a population of about 11.7 million, has been mired in political and human rights crisis since 2015. File photograph: Phil Moore/AFP

Burundi’s ruling party is using its youth wing to force citizens to contribute money towards elections next year, according to a rights group, which says it is another sign the upcoming vote will not be free and fair.

The Great Lakes country, which has a population of about 11.7 million, has been mired in political and human rights crisis since 2015, when President Pierre Nkurunziza announced he would run for a third term in power. That decision, a coup attempt and Mr Nkurunziza’s eventual re-election led to violence and large numbers of refugees fleeing the country.

The Imbonerakure, the CNDD-FDD party’s youth wing, have already been accused of grave human rights abuses, including arbitrary arrests, beatings, and the execution and torture of opposition, activists and journalists, Human Rights Watch said on Friday.

In December 2017, a government order ruled that financial contributions towards the elections should be collected in various ways, including direct deductions from civil servants’ salaries and “voluntary” contributions of 2,000 Burundian Francs (€0.97) from each household. This is a significant amount in a country where more than 65 per cent of people live in poverty, according to World Food Programme data.

The Imbonerakure are blocking citizens who haven’t contributed money from receiving services, including food aid and access to water pumps and schools. In other cases, citizens were forced to donate livestock or food to the ruling party and to help construct party offices, according to the rights group.

Lewis Mudge, central Africa director at Human Rights Watch, said his organisation has been documenting abuses by the Imbonerakure for many years, but this enlarging of responsibilities “is kind of new territory”. The country’s neediest citizens are being targeted, Mr Mudge said. “Burundi is one of the poorest countries in the world. A lot of these people are self-sustaining farmers.”

He said the Burundian government hadn’t made concessions in the years since the last election. “We continue to be worried that the government’s response, instead of opening up the political space the response is to look further inward, to block off the world, to ensure these abuses are happening in the shadows and to pay for large expenditures such as a national election from the people.”

“From where things stand right now and the trajectory we’ve seen since 2015, I don’t think these elections will be free and fair,” Mr Mudge continued, adding that there has been a serious crackdown on opposition.

Even if Mr Nkurunziza finally agrees to leave power, as he has pledged to do, Mr Mudge said the ruling party will continue “this reign which in many incidences is terrifying for people”.

However, rather than losing interest and believing the violence in Burundi is “intractable”, Mr Mudge called on the international community to engage with the situation.

“Now is certainly not the time to look away from Burundi but for international partners – most particularly the African Union, which receives a significant amount of funding from the EU – to look towards it. There is space with which to try and push the government to do the right thing.”