Woman survives in Australian outback for 12 days by boiling groundwater 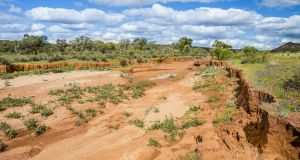 The trio’s truck became bogged down in a riverbed and they suddenly found themselves in a battle for survival. Photograph: iStock

The three Australians told family and friends they were making a quick trip into the central Australian outback. But when their truck became bogged down in a riverbed, they suddenly found themselves in a battle for survival, stranded in a remote landscape with little food and water.

On Sunday, 12 days later, police said they had found one of the three people and a dog alive near a water hole about a mile away from the abandoned truck. Unusual tire tracks spotted by a cattle station worker, as well as a note left inside the vehicle, provided a breakthrough for searchers.

The rescued woman, Tamra McBeath-Riley (52) survived in the 38-degree-plus heat by boiling and drinking groundwater, police said. She was airlifted to a roadhouse about 55 miles (88km) from Alice Springs, where paramedics found her breaking her fast with beer, cola and french fries, said Andrew Everingham, the regional manager for St John Ambulance.

She was treated for dehydration and exposure and released from a hospital Monday. “It is an incredible story of survival, really,” Mr Everingham said. Although Ms McBeath-Riley had experienced some vomiting and gastrointestinal problems, he added, she was “in very good spirits and physically quite well.” Searchers in two helicopters are continuing to look for the other two people, Claire Hockridge (46) and Phu Tran (40), who split from Ms McBeath-Riley about a week ago to seek help. The two had some water with them when they broke away, although there is “significant concern” for their welfare, Mr Everingham said.

When the truck first became stuck in the riverbed, the three stayed with the vehicle for a couple of days. But then they decided to set off toward the Finke River, and left a note inside the truck detailing their plans. For about a week, the group stayed close to the water, either boiling it or sieving it through a shirt to survive, Supt Pauline Vicary of the Northern Territory Police told reporters in Alice Springs on Monday. The three had brought only a packet of cookies and beef noodles for provisions.

They were reported missing four days after they failed to return from their trip. But concerned that nobody was looking for them, Ms Hockridge and Mr Tran decided to venture north with a satellite navigation device and a compass. They hoped to find the Stuart Highway, about 23km (14 miles) away.

Central Australia is known for its remoteness, a place where phone reception is rare and the next town can be hours of driving away. It is also dry and hot, with temperatures soaring beyond 43 degrees on some summer days and dropping rapidly at night.

“We have historically seen a number of people struggle and require rescue, and we have seen some poor outcomes,” Mr Everingham said. Police said that the terrain in the search area included sandy dunes, hard clay, dense trees and rocks. “It’s quite a diverse terrain and challenging terrain to look in,” Ms Vicary said.–New York Times