Kamala Harris drops out of US presidential race 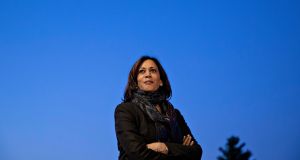 California senator Kamala Harris has withdrawn from the Democratic race for the US presidency, making her the latest figure to drop out of the primary campaign.

Ms Harris, who launched her campaign in January, announced on Twitter that she was halting her bid. “To my supporters, it is with deep regret – but also with deep gratitude – that I am suspending my campaign today,” she wrote, “but I want to be clear with you: I will keep fighting every day for what this campaign has been about. Justice for the People. All the people.

Initially regarded as a strong candidate for the Democratic nomination, Ms Harris failed to capitalise on the early enthusiasm around her campaign.

Despite a stand-out moment in the first Democratic debate in Miami in June when she confronted frontrunner Joe Biden about his record on race relations, the 55-year-old senator did not move past single digit support in national or early-voting state polls.

In particular, she came under fire for equivocating on health care, specifically on the question of her support for the single payer system known as Medicare for all, which has been embraced by some candidates including Elizabeth Warren and Bernie Sanders.

To my supporters, it is with deep regret—but also with deep gratitude—that I am suspending my campaign today.

But I want to be clear with you: I will keep fighting every day for what this campaign has been about. Justice for the People. All the people.https://t.co/92Hk7DHHbR

In recent weeks she has dismissed some staff members and focused her campaign efforts on the early caucus state of Iowa where she was struggling to gain traction. But she failed to attract significant donations from supporters, leaving questions about the viability of her candidacy.

“I’ve taken stock and looked at this from every angle, and over the last few days have come to one of the hardest decisions of my life,” Ms Harris said in an email to supporters on Tuesday. “My campaign for president simply doesn’t have the financial resources we need to continue.”

A former attorney general for California and district attorney of San Francisco her record on criminal justice had also attracted scrutiny.

If elected, Ms Harris would have been the first woman and second black president, and her candidacy was supported by many who believed she represented the increasing diversity of the United States electorate.

Her departure follows the announcement by Montana governor Steve Bullock on Monday that he was halting his campaign.

Fifteen candidates now remain in the race to become the Democratic nominee to take on President Donald Trump in next year’s presidential election. Though Mr Biden, a former vice president, leads the polls, there is no one stand-out candidate in the race two months before the Iowa caucus.

Several of Ms Harris’s rivals paid tribute to her on Tuesday following the announcement. “My dear friend Kamala Harris is a trailblazer,” said her Senate colleague and presidential hopeful Cory Booker. “I’ve loved serving with her in the Senate and every moment we’ve run into one another on the trail. Her campaign broke barriers and did it with joy. Love you sister.”