Paris Letter: Supporters want the French bistro to be recognised as a cultural treasure 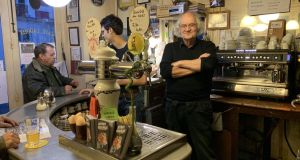 On a mission: Pierre Josse (right), at Le Vaudésir, says the bistro is in mortal peril. Photograph: Lara Marlowe

Pierre Josse waits for me at Le Vaudésir, a typical French bistro in southern Paris. “This place is timeless,” Josse exclaims, listing signs of the little bar-restaurant’s authenticity. “Look at the mouldings! 1900! Look at the wires hanging from the ceiling, the crocheted curtains! It even has Turkish toilets – a rarity these days. And the bar is a real Nectoux, built in the 19th century. It’s the Rolls-Royce of zinc counters!”

Josse is the founder of the Guide du Routard travel books and a connoisseur of bistros the world over. Le Vaudésir is one of his favourites. “When I come for coffee in the morning, the cook is peeling vegetables or shelling peas,” he says. “That’s a sign of a real bistro – no preprepared food.” The plat du jour is listed on the chalkboard, a bargain at €8.20.

Eighteen months ago Josse teamed up with about 20 bistro owners and enthusiasts to lobby for the inclusion of the traditional French bistro on Unesco’s Lists of Intangible Cultural Heritage. They will present their case to the UN organisation this spring.

We have to tear people away from their screens, make them come back to the zinc counters. We have to resist Starbuckisation, the disappearance of places of socialising

The Unesco commission meets every two years. Only one entrant can win per country. “The baguette is our most dangerous competition,” Josse says. “They’re supported by farmers, millers and bakers. We could lose to the baguette.”

The bistro fans obtained a warm letter of support from President Emmanuel Macron. “But, knowing Macron, I can’t exclude the ‘en même temps’,” Josse says, referring to Macron’s penchant for supporting both sides of an argument.

The word bistro – usually spelled bistrot in French – is a legacy of the Russian occupation of Paris after the defeat of Napoleon’s Grande Armée at Waterloo in 1815. When soldiers sneaked away for a drink they shouted “Bistrot! Bistrot!” (Quickly! Quickly!). The name became synonymous with cafe, estaminet or troquet. To make love like a Cossack is another expression from that era, because Russian soldiers earned a reputation as rough lovers.

“Lots of revolutions started in bistros,” Josse says. He quotes Balzac: “The cafe counter is the parliament of the people.” A lifelong Hibernophile, Josse mentions Wolfe Tone in Tailors’ Hall, and Robespierre and Camille Desmoulins plotting revolution at the Procope, which still serves food and drink near the Odéon metro station.

By the late 19th century, industrialisation had made the bistro an integral part of French daily life. In working-class quarters like the 11th district, metalworkers and artisans would duck into the bistro for coffee and Calvados first thing in the morning. When they finished work in the evening they’d meet for an anise-flavoured aperitif at the zinc counter, where they played dice and card games called quatre-vingt-et-un, belote and yam.

The bistro became a meeting place for writers and artists who could not afford to heat their apartments. In the 1950s and 1960s, when there was a two-year waiting list for a telephone in France, cafes served as informal message centres.

The bistro is like an Irish pub. But in a pub everyone joins in. In a bistro you can be left alone to think, read, write memoirs, poems or love letters

Today the bistro is in mortal peril, Josse says. In 1960, France had 200,000 bistros. Today there are fewer than 32,000. The decline has paralleled the demise of what the French call the popular classes, the rise of property developers and the gentrification of cities.

“We have to tear people away from their screens, make them come back to the zinc counters,” Josse says. “We have to resist Starbuckisation, the disappearance of places of socialising.”

Josse is scornful of what he calls neobistros – chains with faux decor and bouncers, and which ask for payment the moment they put wine on the table. He recalls a generous bistro owner in Montparnasse who left the till open by the door so that clients could pay on an honour system, and according to what they could afford.

“The bistro is a ritual, a tradition, the pleasure of being together, of existing,” Josse says. “If a tramp comes in, the owner gives him a coffee or a glass of water.”

The bistro “is like an Irish pub”, Josse continues. “But in a pub everyone joins in. In a bistro you can be left alone to think, read, write memoirs, poems or love letters. The owner keeps an eye on things. If an argument starts he says, ‘You’ve had too much to drink.’”

If his crusade to include the French bistro on the Unesco list succeeds, Josse says, he’ll help the Irish pub achieve the same status. “Even if we never win, because of capitalism, globalisation and modern life, we’re pushing back the deadline. The good fight is a way of life, an energetic means of survival.”