Sydney Letter: While fires burn inside Irish homes, in Australia they are raging outside 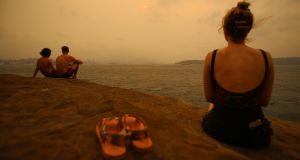 In Sydney on Christmas morning I don’t need an alarm clock. At dawn my local family of kookaburras do that job. No little chirping chicks here. They are seriously loud squawking cousins of the dinosaurs.

So right from its start, Christmas Day in Sydney could not be more different than in Ireland.

Christmas morning will start with a family surf with my kids at Freshwater beach on Sydney’s glorious north shore.

With my Irish genes, the sun under the southern cross is no longer my friend. Like all Irish Australians, it’s time to slip, slop, slap and wrap. Slip on a UV-proof, long-sleeve surf shirt. Slop on some factor 50 sunscreen. Slap on a hat and wrap-around sunglasses to cover your eyes.

I will look about as sexy as a dropped pie, but my dermatologist is holidaying at a five-star resort living on the fees she gets for burning sun spots off my Celtic carcass.

The grandparents should have gone to Boston; instead, they left Ireland and headed south to the “lucky country”.

In Oz everything and everyone has a nickname, even God. His nickname is “Hughie”. So Christmas is Hughie’s birthday!

The Christmas morning surf will be packed with “grommets” – young surfers – riding their learner polystyrene boards that were under the Christmas tree.

Dads will be chest deep in the waves launching their offspring onto small waves. The grommets are like chicks on their first flight out of the nest, wings flaying, awkwardly balancing on their foam surfboards.

The morning surf is a small piece of tranquillity on a day that can be stressful if it’s your turn to host the extended family.

And this year it’s my turn. Happy days.

There is also the other unspoken lore of over-catering. You can never have enough wine, beer, Champagne, ham, chocolate, seafood, strawberries, cherries . . .

When its your turn you are eating Christmas dinner bubble and squeak until Australia Day on January 26th.

While the fires are burning inside the homes in Ireland, in my sunburnt country they are literally raging outside.

Our heartbroken farmers in western New South Wales and Queensland have not planted a crop in three seasons because it has not rained in five years.

No crops and no animals means no income. Our “bushies” are a tough breed but they are at breaking point.

After years of the slow, strangling torture of drought, the tsunami of destructive fire has followed.

Our tinder dry eucalyptus forests are ablaze. The scale of the fires is unimaginable. To put it it context, the equivalent of 2.1 million rugby fields has been destroyed, or half the area of Tasmania. More than 1,000 homes have been burnt.

Unprecedented, unimaginable and unstoppable. The size of the fires is so enormous that man can not stop them. Some fires have been burning since August.

Some rain is predicted for the east coast late on Christmas Day. If it falls it would be truly miraculous.

In Sydney we are sheltered from the harsh realities of life in the bush.

So it’s oysters and tiger prawns for starters, as the ham cooks inside our BBQ oven, placed as far away as possible from the house to keep the heat out. It will be dripping in marmalade glaze, with some roasted potatoes and veggies.

The grave responsibility of preparing mum’s Irish plum pudding recipe has been handed on to my daughter – the poor girl. It will be covered in brandy sauce as we pay our respects to a family tradition.

We will listen to Paul Kelly, singing How to Make Gravy. It’s the Australian equivalent of Fairytale of New York, as Kelly tells the story of a man in prison on Christmas Day, thinking of his siblings and children. He is missing the small things, like the gravy for the turkey.

So, in reality, Christmas in Ireland and Oz is not that different. Despite the heat, the drought and fires, Christmas is about forgetting your troubles and being with the people you love most on this planet.