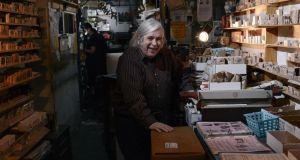 There’s a Christmas Eve party every year in New York’s East Village, a gathering of strangers, customers, neighbours and friends invited to share libations and perhaps a party piece, in the unlikeliest of surroundings.

They meet in a hole-in-the-wall shop on East 11th Street, Casey Rubber Stamps, which sells rubber stamps of the type used to authenticate documents. It’s a haphazard, cramped space, but one that now features in a score of tourist guides.

The proprietor, John Casey (69), a native of Millstreet, Co Cork, hates Christmas, proving his dislike for this time of year with a “Bah humbug” sign strung across his desk.

“I don’t like Christmas, but the very first year I had a store, my very first Christmas, I was only here two months,” he says in his shop, which is cluttered with stamp-making equipment and myriad stamp designs.

“I was broke; I had no money for the supplies I needed; and about seven o’clock in the evening, somebody came in and brought a bottle of Baileys Irish Cream.

“We opened it, and then the next person came in. We gave them a glass of Baileys, and the next person, all of a sudden, went out to the liquor store, bought a bottle of wine and, before I knew it, I had a full-fledged party in my store.

“So every year, I have a Christmas party in the store in memory of that. I have two parties in the store every year: Christmas Eve and Patrick’s Day.” The parties, he said, offer “whiskey and beer – not any food”.

“On occasion, we’ve had strangers walk in the door and have a good time. You can recite a poem, sing a song.”

Today, the rubber-stamp industry is waning, but Casey’s interest was first piqued his interest as the child of a Millstreet builder and farm owner who also ran the Maple dance hall.

“I got into coins very young – five or six years of age,” he said. “My father had a dance hall, and he used to go to the print shop to get posters made.”

The shop made a rubber stamp of one of his coins: “I thought the idea of turning this black-and-white image of a coin into something you could actually use as a stamp was just incredible.”

Casey wasn’t successful until about 1979 – he warns that he’s not good with dates – when he bought up equipment cheaply and began selling self-made stamps at a market on Bleecker Street in Manhattan, later on 7th Avenue.

He went back to Ireland for five years in the 1990s and tried to get a a stamp enterprise going, but it never took off and was plagued by everything from a port strike to a warehouse fire. So Casey returned to New York.

Today, he operates from his tiny store in the East Village, now a neighbourhood stalwart amid the continually rising rents in the city.

“The rubber stamp, as a commercial business, has contracted considerably in the last 20 years,” he said. “There used to be 15 to 20 rubber stamp stores in Manhattan; I think it’s down to about two.”

Now, however, his rarity is a plus.

“People come to New York, and I’m on their bucket list to visit as a small store. I get a lot of Taiwanese and a fair amount of Japanese. I’m in two Taiwanese and two Korean tourist guides to New York. I think I’m in two German guides and I know I’m in another one, too.”

Even in this digital age, Casey says some people are rediscovering the beauty of rubber stamps.

“It’s a funny thing: when the computer started to come in big, I had people say to me, ‘Oh, the computers will put you out of business.’ I knew intuitively that they weren’t,” he says.

“Some of my better customers are the computer people that are into graphics. There’s a different feel; there’s a different tactile aspect to rubber stamps that you don’t get with a computer, and people love that.

“Sometimes, I have a grandpa walk in with a kid, and the kid will look in the window and say, ‘Oooh, what do people use these for? People will use these?’ Then they go out buying half a dozen stamps.”