Jeremy Corbyn blames himself, Brexit and the media for Labour defeat 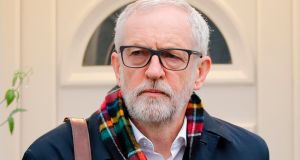 British Labour Party leader Jeremy Corbyn: ‘The Tory campaign amplified by most of the media managed to persuade many that only Boris Johnson could “get Brexit done”.’ Photograph: Tolga Akmen/AFP via Getty Images

Jeremy Corbyn has faced furious MPs at a fractious meeting of the parliamentary Labour Party in Westminster in which he told them he took “responsibility for the result” of the British general election and that he was sorry.

The Labour leader faced new and re-elected members in a House of Commons committee room on Tuesday evening as they spent more than an hour dissecting the crushing election result that produced a Conservative majority.

Mr Corbyn apologised and blamed the defeat on Brexit before being criticised by a string of MPs for how the campaign was run, the significant losses in the north of England and for not having contacted those who had lost their seats.

Mr Corbyn also blamed the media for amplifying the Tory message about Brexit.

“I am very sorry for the result, for which I take responsibility,” Mr Corbyn told the meeting. “I will continue to lead the party until a new leader is elected. I want us to have the smoothest possible transition for the sake of the party as a whole and for those Labour mayors and councillors who are up for re-election in May.

“Despite our best efforts, I believe this election was ultimately about Brexit. The Tory campaign amplified by most of the media managed to persuade many that only Boris Johnson could ‘get Brexit done’. That will soon be exposed for the falsehood it is.

“We must now listen to those lifelong Labour voters who we’ve lost. I believe that Brexit was a major, although not the only, reason for their loss of trust in us.”

To applause, the parliamentary Labour party chairman, John Cryer, led tributes to those who had lost their seats at the start of the meeting, including the former Stoke MPs Gareth Snell and Ruth Smeeth.

However, critics soon lined up to attack Mr Corbyn’s campaign, including the Newcastle North MP, Catherine McKinnell, who read out the list of seats lost in the north-east and said they had not been given enough support.

Others said the party must go through a transformation. The shadow transport secretary and MP for Middlesborough, Andy McDonald, said sarcastically to the press as he left the meeting that it had been “great” and a “pure joy”.

The new MP for Leicester East, Claudia Webbe, who backs Mr Corbyn and served as an Islington councillor, was laughed at in her speech when she said the party had a “lot to celebrate”. She spoke for almost ten minutes, explaining to colleagues that they should be happy about the number of black and minority ethnic MPs.

There has been speculation mounting since the weekend that the parliamentary Labour Party might seek to bring forward Mr Corbyn’s departure from the March date set by the general secretary, Jennie Formby.

They cannot make him leave sooner but they could take an indicative vote to show him the strength of feeling among members.

The meeting was also a chance for mooted leadership and deputy leadership candidates to drum up support.

The potential candidate Rebecca Long-Bailey, who is shadow business secretary, sat at the back of the room. The shadow foreign secretary, Emily Thornberry, who is also tipped to want to run for leader, was also present as was the shadow education secretary, Angela Rayner, and shadow justice secretary, Richard Burgon. – Guardian