Johnson gives speech in Sedgefield, once the constituency of Labour ex-PM Tony Blair 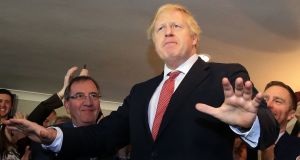 British prime minister Boris Johnson has vowed to repay the trust of former Labour voters in northeast England who switched to the Conservative Party in the election, contributing to a landslide election victory for the Tories, during a visit to the region.

Mr Johnson told new Tory MPs and local activists they had changed the political landscape, the Conservative Party and the country for the better, in a speech in Sedgefield, once the constituency of the former Labour prime minister Tony Blair.

Sedgefield was one of several former Labour heartland constituencies in the northeast and the midlands to be taken by the Conservatives as they won an 80-seat majority in Thursday’s general election.

“I want the people of the northeast to know that we in the Conservative Party, and I, will repay your trust. Everything I do as your prime minister will be devoted to repaying that trust.

“First of all, what are we going to do? We are going to get Brexit done.”

Mr Johnson spoke at a crowded Sedgefield cricket club. In a pantomime-style call and response, the prime minister ran through the Conservative Party’s main manifesto promises, including the misleading pledges to build 40 new hospitals and recruit 50,000 more nurses, and to employ 20,000 new police.

“What we want to do as Conservatives [is] we want to take our country forwards, but we want to do it by uniting and levelling up across the whole of the UK,” he said. This would be achieved by investing in infrastructure across the country and spreading opportunity.

He added: “Our country has now embarked on a wonderful adventure. We are going to recover our national self-confidence, our mojo, our self-belief.”

Speaking outside No 10 on Friday, Mr Johnson had said he would “work round the clock” to repay the trust of those who had voted Conservative for the first time.

His comments were later echoed by Robert Jenrick, the housing secretary, who said the government planned to redirect investment towards those communities that felt they were not being heard.

“We are very grateful to these traditional Labour voters, in many cases, for lending us their support on this occasion, perhaps because of Brexit,” Mr Jenrick told BBC’s Newsnight on Friday. “We need to earn that trust now and hopefully we will have five years ahead of us to do that.”

Earlier on Saturday, Paul Nowak, the deputy general secretary of the Trades Union Congress, said if Mr Johnson wanted to retain the support of voters in the midlands and northeast he needed to stand by promises to engage with the issues that motivated them.

Mr Nowak urged Mr Johnson to “put your money where your mouth is, engage with the unions, engage with working people” to get a Brexit deal that protected workers’ rights.

“You know, there are some contradictions in the prime minister’s position,” Mr Nowak told BBC Radio 4’s Today programme. “He said, I think, before the election that he wants to protect and enhance employment rights, but if you look at that withdrawal Bill, it delivers none of those protections.

“I think the government needs to now widen the conversation to include businesses, to include trade unions, to think about what this future relationship looks like.

“And I think our message clearly to Boris Johnson would be to put people before politics, to deliver a Brexit deal that does protect jobs and employment rights, and I think that means getting a right deal, not just a quick deal. And I think it does mean standing by the commitments he’s made to those voters in the northeast and in the midlands who may have voted for the first time.”

He added: “A deal that threatens jobs and people’s employment isn’t a deal that we can live with.”

Also on Saturday, John McDonnell confirmed he will not be part of Labour’s next shadow cabinet following the party’s crushing defeat in Thursday’s election. The shadow chancellor, who played a prominent role in Labour’s election campaign, said that “I’ve done my bit”, and suggested a big reshuffle of Labour’s frontbench team will now take place.

Mr McDonnell added that while “Jeremy [Corbyn] was the right leader”, it is time for the party to “move on” under new leadership.

“I’ve done my bit. We need to move on at that stage with that new leader,” he told reporters.

A senior source close to Mr McDonnell, who has been shadow chancellor since 2015, said: “John will stay in place until a new leader and new frontbench team is in place.”

It comes as Mr Corbyn has indicated he will quit as Labour leader in the early part of next year, despite facing calls to quit immediately after his party’s poor election showing. –Guardian/PA