When a fire storm swept over his property in Australia's new South Wales, destroying numerous properties in its path, Steve Harrison had no time to leave. Video: Reuters 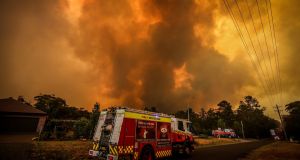 Firemen prepare as a bushfire approaches homes on the outskirts of the town of Bargo on December 21st in Sydney. Photograph: David Gray/Getty

Emergency-level fires have swept across parts of New South Wales (NSW) and South Australia, and the death toll and number of injured firefighters has risen, as the country’s severe heatwave and bushfire crisis continued on Saturday.

Two people were confirmed dead in South Australia, and homes were destroyed and communities evacuated in what authorities described as “an awful day” in which fires raged across three states, even creating their own thunderstorms in some parts of NSW.

At Lithgow, about two hours’ drive west of Sydney, residents were forced to flee as fires threatened the community of more than 10,000 people and destroyed several homes on the outskirts of the town. At 7pm, a person was reported unaccounted for in the Dargen area, near Lithgow, the ABC reported.

Four firefighters in NSW were treated for heat exhaustion on Saturday, the ambulance service said, while another firefighter was reportedly injured after being struck by a truck in Richmond.

On Saturday night, the Blue Mountains communities of Bilpin and Blackheath remained under threat, while southerly winds pushed a blaze away from Yanderra on Saturday afternoon. Fire fighters were expected to remain on the ground into the night.

“We have seen property impacted and lost,” the NSW RFS commissioner, Shane Fitzsimmons, told a press conference on Saturday afternoon. “We have 3,000 firefighters and emergency services personnel out there dealing with the fires, a bad weather day.”

Ahead of Saturday, authorities had been preparing for what they knew would be rarely-seen conditions. Catastrophic fire conditions were declared in the state, with high winds, above 40C temperatures, low humidity and long-term dryness in the bush combined to fan flames across the country.

Catastrophic is the highest fire danger rating and is the equivalent of the conditions before the 2009 Black Saturday bushfires in Victoria. Saturday was only the second time that greater Sydney had catastrophic conditions declared.

As conditions worsened, major roads, including sections of the Princes Highway, Hume Highway and Greater Highway were closed during the day, with police warning people to stay off the roads despite the Christmas holiday rush. Train services on rail lines west of Sydney were also delayed and cancelled.

By 4.30pm, seven fires in NSW were burning at emergency, including the more than 400,000-hectare Gospers Mountain mega-fire, and the Green Wattle Creek fire, where two firefighters died on Thursday when their truck overturned.

A southerly change swept through at 5pm, making the fire even more erratic and changing the fire direction. Around this time, NSW authorities began warning of a bushfire-generated thunderstorm that had formed over Currowan and Tianjara fires in the Shoalhaven area, on the NSW south coast.

The fire service said this would lead to increasingly dangerous fire conditions. Such storms, known as pyroCB, can produce embers hot enough to spark new fires 30km from the main fire.

A strong southerly change is moving up the coast. Some fires have generated thunderstorms ahead of the change. The change will increase winds and see erratic fire behaviour.

Fires also continued to burn in Victoria and South Australia. The South Australian premier, Steven Marshall, confirmed that two people had died in the state on Friday. One, a 24-year-old from Queensland, died in a car crash at Lameroo. Another person died in a fire in the Adelaide Hills that also seriously injured another.

The Cudlee Creek fire in the Adelaide Hills, and a fire on Kangaroo Island, were both at emergency but were downgraded to watch and act.

Twenty-three firefighters were also injured in South Australia, one seriously, and three trucks were destroyed. Five homes, 28 buildings and 16 vehicles had been destroyed.

In Victoria, the Marthavale fire in East Gippsland quadrupled in size overnight, growing so large it created its own weather. Throughout Saturday, two emergency warnings were in place, for Ensay, Reedy Flat, Stirling, Holstons; and Tambo Crossing, Wattle Circle, Stirling.

The acting prime minister, Michael McCormack, said the prime minister, Scott Morrison, would return to Australia on Saturday night, after he cut short a family holiday to Hawaii.

The prime minister had apologised on Friday for “any offence caused” by the holiday, which began on Monday, and said he would return “as soon as can be arranged”.

Mr Morrison had originally planned to return to the prime minister’s role on Monday night, but he boarded a plane back to Australia on Saturday and is expected to land in Australia later in the evening.

Marshall, the South Australia premier, cancelled his own Christmas holiday as the fires swept South Australia. He was scheduled to leave for New Zealand this week but said he would remain in Adelaide.

With Mr Morrison away, McCormack conceded at a press conference that he agreed Australia needed to do more to combat the climate crisis, though he did not outline what that might be. But Mr McCormack also hit out at what he called climate change “hysteria” and linked the fires to other causes, including dry lightning strikes and self-combusting manure.

On Saturday morning, the federal opposition leader, Anthony Albanese, criticised Morrison for a lack of transparency around the trip.

Albanese said “media inquiries were met with misinformation, at best” after Mr Morrison’s office initially told reporters he was not in Hawaii.

The NSW premier, Gladys Berejiklian, and police told residents to please delay travel and obey directions from authorities. “Today is not the day to start your holiday,” a police spokeswoman said.

On Saturday, protesters gathered outside Kirribilli House, accusing Mr Morrison of a lack of leadership on the fires and on combating climate change.

The NSW RFS has set up a dedicated donations fund for the families of two firefighters who died on Thursday after their truck overturned near the Green Wattle Creek fireground.

Mr Fitzsimmons said that conditions were expected to improve after Saturday, but noted the fires would continue to burn unless the state received a much-needed downpour.

“We will not get on top of these fires until we get some decent rain, we have said that for weeks and months,” he said. – Guardian