With US backing, Israel plans to extend sovereignty to 30% of occupied West Bank 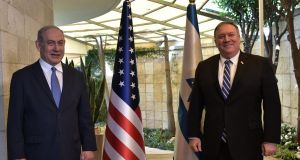 US secretary of state Mike Pompeo discussed Israel’s plans to annex large parts of the West Bank during talks in Jerusalem on Wednesday with Israeli prime minister Binyamin Netanyahu.

Mr Netanyahu is expected to present his annexation plans in July, despite fierce opposition from the Palestinians, the Arab world and much of the international community.

Mr Netanyahu’s fifth government is due to be sworn in on Thursday after he agreed with his main coalition partner, Benny Gantz – head of the centrist Blue and White party – that legislation will be introduced to annex Jewish settlements and the Jordan Valley, which together make up about 30 per cent of the entire occupied West Bank.

Extending Israeli sovereignty to parts of the West Bank was contained in the US peace plan – the so-called deal of the century – which also called for negotiations between Israel and the Palestinians over the creation of an independent Palestinian state in the remaining areas.

“There remains work to do to make progress on that, and I am looking forward to it,” Mr Pompeo said, after earlier stating that annexation was an Israeli decision.

Mr Netanyahu, who is keen to press ahead with annexation before the US election in November, said that the new Israeli government is “an opportunity to promote peace and security based on the understandings I reached with President [Donald] Trump”.

An Israeli-US team has already started drawing up detailed maps for the annexation but its work has been delayed by coronavirus.

Palestinian president Mahmoud Abbas warned that annexation will mean the end of the peace agreement with Israel and Jordan’s King Abdullah II has also threatened to cancel Amman’s peace treaty with Israel if Israel extends sovereignty over the Jordan Valley.

Ireland, along with France, Belgium and Luxembourg, is urging its European Union partners to consider threatening Israel with a tough response if it goes ahead with annexation.

The possibility of punitive economic measures may be raised at Friday’s meeting of EU foreign ministers, although all member states would have to agree to any collective action. Close allies of Israel, such as Hungary, the Czech Republic and Austria, may block any moves to impose sanctions on Israel.

An EU spokesman on Monday declined to comment on internal discussions but said: “Annexation is contrary to international law and if annexation goes ahead, the EU will act accordingly.”

Mr Pompeo’s trip was the first visit to Israel by a foreign official since the country barred non-Israeli nationals from entering to reduce the spread of coronavirus. Mr Pompeo wore a red, white and blue face mask when he arrived.