Court finds bond-buying programme does not respect ‘principle of proportionality’ 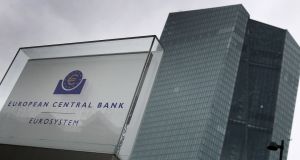 The headquarters of the European Central Bank in Frankfurt. Tuesday’s ruling ends a marathon lawsuit by German critics of the ECB’s “whatever it takes” approach to support the euro.

Germany’s highest court signalled the Bundesbank may be prohibited from participating in bond-buying programmes unless the European Central Bank (ECB) explains its emergency actions adequately to national governments and parliaments.

In a landmark ruling on Tuesday the constitutional court found bond-buying did not in itself breach the ECB’s mandate. But it criticised Germany’s federal government and Bundestag parliament for effectively rubber-stamping Bundesbank participation in ECB bond-buying to help stabilise the single currency and euro-area member states.

With such bond-buying programmes, the Karlsruhe court found the ECB did not respect the “principle of proportionality”.

“The ECB fails to conduct the necessary balancing of the monetary policy objective against the economic policy effects arising from the programme,” the federal constitutional court said. “Therefore, the decisions at issue . . . exceed the monetary policy mandate of the ECB.”

In his final sitting as court president, Prof Andreas Vosskuhle insisted the seven-to-one ruling had nothing to do with the ECB’s €750 billion Covid-19 emergency measures. But, he added, it was the first time Germany’s highest court had put itself on the other side of the argument to the European Union’s highest court, seated in Luxembourg,

In 2018 the Court of Justice of the EU (CJEU) found that ECB bond-buying was in line with EU law.

Prof Vosskuhle said his chamber could find no evidence of direct government financing by the ECB – outlawed by its mandate – but said German politicians should have examined more closely the objectives and mechanisms involved in such a programme.

In particular, the judges said no thorough analysis had been carried out on whether the Public Sector Purchase Programme (PSPP) provided an adequate boost to euro-area economies with acceptable risk and side-effects.

Tuesday’s ruling ends a marathon lawsuit by German critics of the ECB’s “whatever it takes” approach to support the euro. Buying sovereign bonds breached the ECB mandate, the critics say, with damaging knock-on consequences from historically low interest rates to spiralling property prices.

The overall asset-purchasing scheme was used between 2015 and 2018 to buy government bonds and other securities worth about €2.6 trillion. More than €2.1 trillion in purchases were made as part of the PSPP. This programme was reactivated last November amid euro-zone pressures over Brexit and trade conflicts

Initial reaction in Germany to the ruling was mixed. Economist Uwe Burkert of the state-held LBBW bank, described the ruling as “explosive” and predicted a three-month window the court gave the Bundesbank to analyse its participation in ECB bond-buying could see its departure form the programme.

ING Germany chief economist Carsten Brzeski said it would take time to understand the ruling’s implications, which could yet prove “a real problem for the ECB in the recovery phase of the crisis”.

Commerzbank chief economist Jörg Krämer predicted bond-buying would continue but would require the ECB to, in future, work harder to “prove that the programme is really proportionate so as to win approval by the German government and lawmakers”.

Some EU policy analysts suggested the Karlsruhe judges may have unwittingly encouraged politically contested courts elsewhere in the EU to take a more selective approach to EU law and institutions.

“From a European integration perspective, the ruling is a disaster,” said Prof Hendrik Enderlein of Berlin’s Hertie Business School. “The signal by a national court that the CJEU’s assessment is not ‘comprehensible’ and ‘ultra vires’ [beyond one’s legal power or authority] is a major blow to the EU. How would Germany react if Hungarian or Polish courts issued such statements?”

The ruling prompted the European Commission to “reaffirm the primacy of EU law and the fact that the rulings of the European Court of Justice are binding on all national courts”.

1 Belgium helps Ireland to a Brexit boon
2 Can Grafton Street stop the flood of closures?
3 ‘My rent here is so low it’s a joke’
4 New Powerscourt Springs hotel to open in defiance of virus gloom
5 British pound sinking to ‘emerging market currency’ status
6 AIB to compensate another 1,100 tracker mortgage holders
7 This charming man: how Paschal Donohoe won the Eurogroup presidency
8 ‘Sad day’ for House of Ireland as tourism retailer goes out of business
9 More promises from Minister for Housing but will they build change?
10 Irish pharma sector warns of protectionism as US corners supply
Real news has value SUBSCRIBE