Covid-19 testing in South Africa: ‘If the disease comes here it will spread like wildfire’ 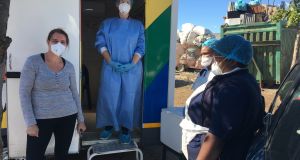 Ntuthuzelo Mxokozeli shifted nervously on his feet while standing in the queue outside the government’s coronavirus screening tent in Gugulethu township, a predominately black residential area on the outskirts of Cape Town.

The 50-year-old local government employee was not feeling ill, he said, but he had decided to come to the mobile clinic to be tested for Covid-19 after hearing the disease spreads easily in high-density communities.

“I need to know my [Covid-19] status because people are not taking it seriously here,” Mxokozeli explained, “Go anywhere in Gugs and you will see locals just hanging out like normal. Their behaviour suggests they do not really worry about Covid-19, which scares me.”

With a shake of his head, he added “if the disease comes here it will spread like wildfire because we live so closely together”.

South Africa’s implementation of a hard lockdown three weeks after recording its first Covid-19 case on March 5th, and its plan to roll out a comprehensive screening and testing programme, were hailed as an exemplary response to the virus by the World Health Organisation.

Since mid-April, 28,000 volunteers have been deployed nationwide to screen people in townships and informal settlements, and 67 mobile clinics have been carrying out testing in targeted areas.

Although the increase in South Africa’s daily infection rate has been kept in check by the government’s strategies for much of April and early May, the authorities are under no illusions about what lies ahead.

Health experts believe the infection rate will rise rapidly as winter takes hold, especially at the level of community transmissions, and they expect South Africa’s peak infection rate to hit only in August or September.

Indeed, experts warn that as many as 48,000 people could die if the country fails to sufficiently flatten the epidemic’s curve.

Adding to the challenge, the government’s decision to ease the country’s lockdown restrictions from May 1st primarily for economic reasons has seen an estimated 1.5 million people return to work in different sectors, mostly via public transport.

However, the five weeks of hard lockdown since March 26th has bought South Africa valuable time to prepare its health services and isolation facilities for the expected influx of patients.

Mass evacuation plans have been put in place by the government to move citizens to “safe zones” if the worst-case infection predictions materialise, and 1,644 emergency field hospitals and quarantine sites have been established to cater for at least 78,000 infections.

As part of its efforts to contain the spread of the virus, the government aimed to conduct 30,000 virus tests per day by the end of April, but thus far it has fallen well short of this target due to capacity issues at public and private sector laboratories.

Until last week fewer than 10,000 tests were being carried out most days, according to the National Institute of Communicable Diseases website. But since then the rate has improved, rising to a high of 17,257 on May 10th – the highest number of tests conducted yet in a 24-hour period.

The government’s daily Covid-19 update on Tuesday revealed that South Africa recorded 698 new cases in the previous 24 hours, bringing the total number of confirmed virus infections to 11,350 – and deaths to 206.

The Western Cape Province, where Gugulethu is located, has the greatest number of cases by far in South Africa– with 6,105 by May 12th – making it the country’s virus epicentre.

Local health officials attribute the province’s high infection rate to the fact that it is doing more screening and testing than other regions.

But one does not have to travel far in Gugulethu to come across evidence that many township residents are not adhering to social distancing measures.

A short distance from the roadside screening and testing site in Gugulethu is Nyanga train station. On April 29th the taxi rank outside the railway junction was bustling with activity despite the severe movement restrictions South Africa’s lockdown imposes on people.

Dozens of hawkers were selling clothes and trinkets and engaging closely with passersby. Some people wore face masks, but there was little evidence of social distancing.

Katherine Gill, a doctor with the Desmond Tutu HIV Foundation, has volunteered to work with one of its two mobile Covid-19 testing clinics. For the past month she and her colleagues at the foundation have been testing for Covid-19 in large townships and informal settlements across the Western Cape that are potential hotspots for the disease.

“Our aim is to identify virus clusters so we can deal with them before it spreads. Community health workers go from door to door asking people if they are sick, and, if they have certain symptoms, they send them to us for testing,” Gill explained.

According to the Tutu foundation’s Covid-19 project co-ordinator, Yoliswa Faku, on a busy day the team, which moves to a different site each day, tests about 120 people for the virus, but on average they see about 70.

“People are very keen to be tested for Covid-19 because they know they can be asymptomatic even if infected,” she said.

Gill said a striking feature of the outbreak around the province is that many people who test positive are not visibly sick when tested.

“A virologist at the laboratory involved in analysing the tests we had conducted in the third week of April told me lots of tests were coming back as positive for Covid-19,” she said, “This really freaked me out because most of the people we tested that week did not look ill to us.”