Germany to tighten restrictions in effort to curb Covid-19 spread 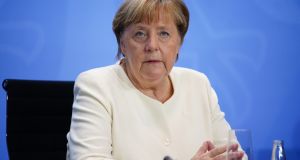 Germany will restrict the size of gatherings and fine people who flout tracking rules in an effort to contain the spread of the coronavirus over autumn and winter, chancellor Angela Merkel said on Tuesday.

The restrictions would be targeted, as a further shutdown of the whole country needed to be avoided “at all costs”, she said after a conference with the leaders of Germany’s 16 states, adding that keeping the economy going was a priority.

By European standards, Germany has experienced relatively low infection and death rates so far during the pandemic, but Dr Merkel said cases could hit 19,200 per day if current trends continued.

The country reported 2,089 coronavirus cases on Tuesday, bringing the total to 287,421, with 9,471 fatalities, said the Robert Koch Institute for infectious diseases.

“We have learned a lot and got through the summer well but we know a more difficult time lies ahead – autumn and winter – and a gradual rise, in some areas a significant rise in infections, is cause for concern,” Dr Merkel told reporters.

She said a “hot spot strategy” would limit private parties to 25 people and public ones to 50 in areas where the infection rate hit 35 per 100,000 over seven days.

The German economy contracted by 9.7 per cent in the second quarter as household spending, company investments and trade collapsed at the height of the pandemic. Dr Merkel’s government has launched various stimulus measures, financed with record new borrowing, that it and economists expect will help engineer a significant return to growth during 2021.

“We want to act regionally, specifically and purposefully, rather than shutting down the whole country again – this must be prevented at all costs,” said Dr Merkel.

Infections have been rising in Germany for weeks but state premiers have been at odds on what action is appropriate, partly because of regional variations in cases.

Dr Merkel said other priorities were for schools and nurseries to stay open. People who gave false identities to restaurants would be fined €50 and work would be done to improve ventilation in buildings over the winter.

Response to infections in Finland

Meanwhile, Finland’s government on Tuesday ordered all bars and restaurants to close at 1am and to stop alcohol sales from midnight on October 8th to help contain the spread of coronavirus.

“The information provided by authorities is alarming . . . the number of infections is rising rapidly,” said minister of family affairs and social services Krista Kiuru. She added that local authorities would have the right to order restaurants and bars to end alcohol sales earlier, at 10pm, and to close their doors at 11pm wherever the virus was spreading most rapidly.

Finland’s Covid-19 numbers have remained among the lowest in Europe for months but its public health authority said 149 new cases had been reported on Tuesday, among the highest daily numbers for several months.

Since the beginning of the pandemic in March, Finland has recorded 345 deaths and 9,892 cases of Covid-19 – 1,016 of them in the two weeks to September 26th. “The share of positive test results has risen to one per cent and in some regions even above,” said Ms Kiuru. – Reuters